An unfortunate group of Army recruits who recently arrived at Fort Benning, Georgia for basic training will first endure several... 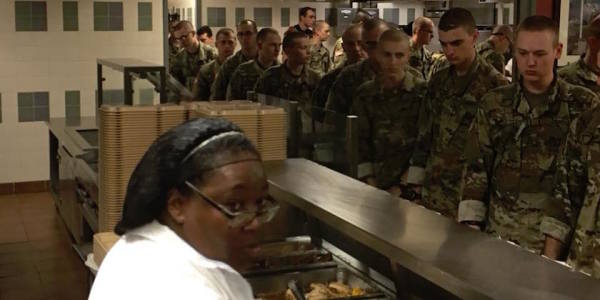 “Due to the influx of trainees coming to Fort Benning, trainees who enlisted as Infantrymen may be held at 30th Adjutant General Reception Battalion for an extended period of time,” reads a statement posted to the 30th AG Facebook page on July 9.

The announcement prompted a flood of questions from concerned parents, including one who heard that “young troops who showed up to 30AG after my son did are starting basic before him.” He asked, “Could this possibly be true?” (The answer: yes.)

Meanwhile, a handful of commenters reacted to the Facebook post with the laughing-face emoji. One jokester went so far as to write, “30th AG is 100 times worse than basic training, have fun suckers!!!” adding, “it’s the most boring place you will ever be in your life.”

That’s not an overstatement. If the Department of Motor Vehicles and a beef cattle farm managed to have a baby, 30th AG would probably be it. It is there that many a recruit, including this author, have learned that it is totally possible to fall asleep standing up.

Army Times reported over the weekend that there are upwards of 400 infantry recruits currently waiting to report to the 198th Infantry Brigade for 14 weeks of one-station training. Basic training posts tend to swell during the summer months, as many recruits begin the enlistment process upon graduation from high school.

However, a Fort Benning spokesman described this year’s backlog as “larger than usual.” Some recruits, he said, could be stuck in 30th AG limbo until as late at Aug. 3. The luckiest will ship on July 27.

In the meantime, the recruits will spend their days and nights doing fun stuff like standing in formation in the sweltering Georgia heat. Every 45 minutes or so, someone will forget how to stand at parade rest or accidentally address a drill sergeant as “sir,” and mass punishment will ensue. They will sleep when they’re dead.

Additionally, 30th AG leadership has “developed and implemented a training plan to keep trainees engaged and prepared for their future report date,” according to the Facebook post. Friends and family members were also encouraged to write recruits letters.

“This is wonderful!” exclaimed one grateful mother in response. “They will all be so happy to receive some words from home. Thank you very much!!!!!”