His defense of women in uniform brought too much unwanted attention, investigators said. 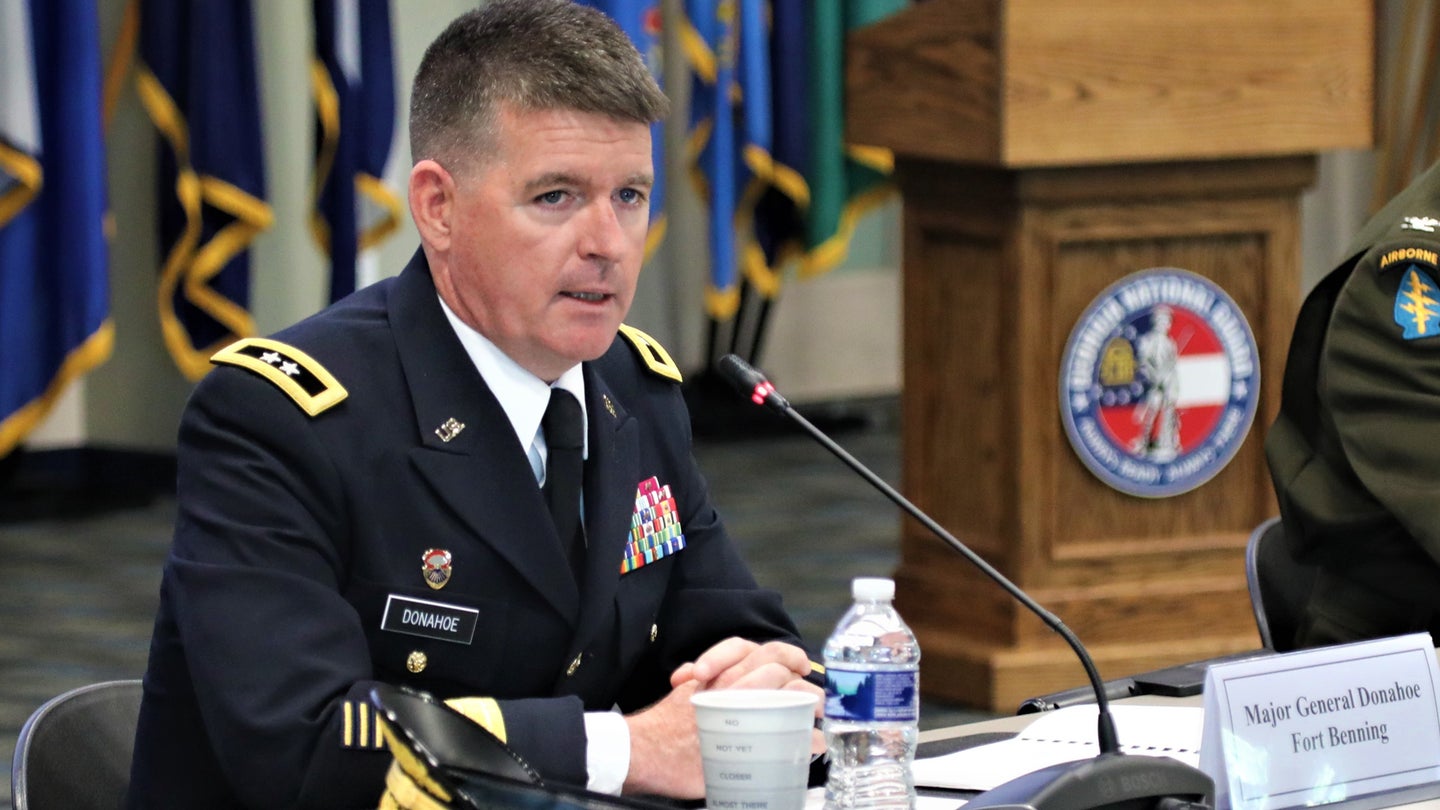 An Army investigation of the former commander of the Maneuver Center of Excellence at Fort Benning, Georgia, determined that he brought “negative publicity” and attention to the Army by engaging with trolls online and defending servicewomen from partisan attacks.

The Army investigated Maj. Gen. Patrick Donahoe for improper use of social media, toxic and counterproductive leadership, and failing to treat a subordinate with dignity and respect, according to the investigation report obtained by Task & Purpose.

Investigators found that only the allegation of improper social media use was substantiated based on tweets Donahoe sent defending servicewomen in response to commentary from  Fox News host Tucker Carlson and engaging with Twitter trolls who argued against the vaccination of soldiers for the novel coronavirus (COVID-19).

The report says Donahoe’s comments received “national media coverage” from Fox News personalities like Carlson and Laura Ingraham, as well as RepublicWorld.com and OpIndia.com, two right-wing Indian news outlets. And while it appears investigators understood Donahoe’s position in defending servicewomen online, the negative attention it brought on the Army from right-wing outlets was too much.

“While potentially admirable,” the Inspector General report says of Donahoe’s rebuke of Carlson’s comments about women weakening the military, “his post brought a measurable amount of negative publicity to the Army, enough that [the Office of the Chief of Public Affairs] warned [the Secretary of the Army] of the fallout.”

The investigators also took issue with Donahoe’s public engagement with subordinate officers on Twitter. Investigators said the allegations of toxic and counterproductive leadership and failing to treat a subordinate with dignity and respect were unfounded.

Army Times first reported that Donahoe, who is one of several Army generals who have built up substantial Twitter followings by regularly posting about the service and engaging with people online, was under investigation.

While Donahoe was expected to retire, he was “temporarily assigned as a special assistant to the Commanding General of the U.S. Army Training and Doctrine Command” as the investigation concluded, Army Times reported. It’s unclear what kind of impact the investigation’s findings will have on Donahoe’s retirement.

Army spokeswoman Cynthia Smith said in a statement that as “a general principle, the Army expects all Soldiers to appropriately use social media to communicate, to demonstrate professionalism at all times, and to treat people with dignity and respect, as required by both DoD and Army policy.” Donahoe declined to comment.

According to the investigation report, which was signed and approved last month by Lt. Gen. Donna Martin, the Army Inspector General, the primary complaints about Donahoe’s social media use centered around his engagements with right-wing accounts on Twitter. In 2021, for example, Donahoe — along with other Army leaders — spoke out against comments made by Tucker Carlson regarding women in the military.

On his evening Fox News show in March, Carlson criticized the military as becoming “more feminine” because military services had policies in place to better serve their women in uniform.

Multiple Army leaders, including Donahoe, immediately came to the defense of women in uniform. Donahoe shared a video on Twitter of him conducting a re-enlistment ceremony for a female staff sergeant, saying Carlson “couldn’t be more wrong.” His boss at the time, Gen. Paul Funk, commander of Army Training and Doctrine Command, tweeted in agreement with Donahoe, saying the women who “serve honorably every day around the globe … prove Carlson wrong through determination and dedication.” The deputy commander of TRADOC also disagreed with Carlson’s comments in a tweet, saying women “are NOT ‘making a mockery of our military’. You WISH your daughter was as AWESOME as MINE!” The discourse even reached Sgt. Maj. of the Army Michael Grinston, who called Carlson’s words “divisive” and said women “will dominate ANY future battlefield we’re called to fight on.”

According to the investigation, comments by senior military leaders were criticized in a letter from Sen. Ted Cruz (R-Texas) to Secretary of Defense Lloyd Austin.

“Multiple military leaders have tweeded video of themselves, while in uniform, as they attack [Tucker] Carlson, including … the Commanding General of the U.S. Army Maneuver Center of Excellence,” the report quotes Cruz’s letter as saying.

Donahoe disagreed that his response to Carlson was “partisan activity,” telling investigators that it was an “attempt to defend’ the service of women in the Army.”

“If we… as Army leaders are unwilling to defend them in public, I think that is a tremendous threat to the cohesion of our Army,” Donahoe is quoted as saying.

Investigators ultimately said that Donahoe’s tweets to Carlson “exhibited poor judgement” and that the “subsequent media coverage drew national attention … and it cast the Army in a negative light.” Donahoe said in the report that higher-ups, whose names are redacted, did not suggest, request, or order that he delete his tweet “that precipitated the letter Senator Cruz sent Secretary Austin.”

“To the contrary, [redacted] expressed his appreciation for me and other Army senior leaders displaying genuine support and respect for women in uniform,” Donahoe said, according to the report.

In another instance, Donahoe engaged with Josiah Lippincott, a Marine veteran and graduate student at a conservative university who regularly attacked military officials and service members online. Lippincott responded to Donahoe’s tweets encouraging soldiers to get the mandated COVID-19 vaccination comparing vaccines to suicides among service members.

“General, in Q4 2020 alone, there were 26 more suicides than in Q4 2019. There have been 26 Covid deaths TOTAL in DoD,” Lippincott said. “The lockdowns, liberty restrictions, quarantines and general disruption of servicemember’s lives is a way bigger killer than the virus.”

Donahoe responded that Lippincott’s “false equivalency of suicide compared to the virus doesn’t hold up.” He later responded to another of Lippincott’s responses by tagging Hillsdale College, the private conservative college where Lippincott was getting a PhD, and telling them to “come get your boy.”

Donahoe later told his battalion commanders and command sergeants major that what he did on Twitter was “not the way to go about it,” and encouraged them to “tell their story” and highlight what was happening at Fort Benning. Donahoe also told investigators that the “come get your boy” comment was “snarky” and “beneath him,” and that he was “not following his own advice.”

The third issue that investigators took with Donahoe’s social media use includes his engagement with junior officers. That included his joking with an officer in the Armor Basic Officer Leader Course at Fort Benning that he wanted “co-author credit” on her battle analysis, which investigators said could have given the school cadre the impression that it “may have actually been MG Donahoe’s work.”

Donahoe told investigators it was “clearly” a joke and that no concerns about her relationship with the cadre were ever raised. Investigators also pointed out his engagement with a female Army armor officer who was getting threats of sexual assault and harassment online as potentially problematic. Donahoe responded to investigators that she was getting “misogynistic and cruel” comments on her photo, and said he was “protecting his soldier in the ‘larger context of gender integration in the combat arms branches’ and his role as a leader,” the report said.

Up until the investigation, Donahoe said conversations with his leadership never indicated there was an issue with his use of social media. In fact, he told investigators that he felt “nearly all them were positive” and encouraging him to use his platform “to tell the Army’s story and gain insight into [his] formation.”

Nevertheless, the investigators took issue with Donahoe’s social media use in that they felt it was inappropriate to engage with subordinates, that he did not “act with dignity and respect,” and brought negative attention to the Army.

“The media and public outcry demonstrated MG Donahoe had not thought about what he typed before he posted his tweets to Mr. Carlson, or Mr. Lippincott, nor had he given any consideration of the impacts given their larger audience of followers,” the investigation says. “The provisions for dignity and respect in AR 600-20 apply to ‘all people,’ ‘in all aspects of life.’”

In regards to his social media engagement with subordinates, investigators said Donahoe violated Training and Doctrine Command Regulation 350-36, which prohibits training cadre from forming personal relationships with students and engaging in “a personal telephone conversation with a student unrelated to the training mission.”

Other allegations against Donahoe which were unsubstantiated targeted his leadership style, with one person complaining that Donahoe was “toxic,” “radioactive,” “sarcastic,” and didn’t provide enough guidance to his team. But investigators found the opposite: One leader from Fort Benning’s Airborne and Ranger Training Brigade (ARTB) told investigators that Donahoe “adapted his leadership style over time as those around him provided feedback,” and that Donahoe regularly met with commanders to discuss their experiences.

“He had never heard a [brigade commander] speak negatively about MG Donahoe’s leadership, nor that the culture or climate had declined,” the report said the ARTB official, whose name is redacted, told investigators. “He thought MG Donahoe trusted and emboldened him and his fellow [brigade commanders] to do what they needed to do for their commands.”

Another official whose name was redacted told investigators Donahoe “provided ‘plenty of guidance’” to commanders, and that they found Donahoe to be “a charismatic and passionate leader, teacher, mentor, and was approachable.” The main complainant who alleged toxic and counterproductive leadership described Donahoe as “sarcastic,” the investigation said, but no one investigators spoke with “described an incident or provided evidence that MG Donahoe abused subordinates.”

The Army and military as a whole have struggled to find footing in an age where social media both dominates much of the news conversation and remains where the generation senior leaders want to recruit spends much of its time. News of the Donohoe investigation came on the heels of the Defense Department’s rollout of its first department-wide social media policy, which states that service members should ensure their personal accounts are “clearly” identified as personal and follow existing guidelines relating to political activity and endorsements.

“In a digital world where lines of truth and authenticity are so often blurred, it’s important that institutions like us have trusted, verifiable and reliable presences,” Andy Oare, director of digital media for the Office of the Secretary of Defense, said in the policy’s release. “We have a duty to the American people to show the work we’re doing, to tell the story of our service members, and to present that information through channels they use in their daily lives.”