Lt. Gen. Ted Martin is having a better time than anyone you know. 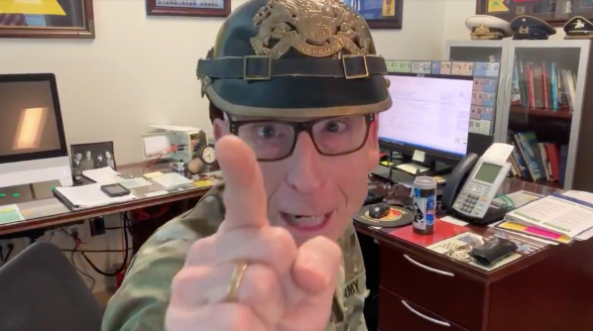 There are plenty of things we know about Army Lt. Gen. Ted Martin thanks to his Twitter feed.

We know, for instance, that he loves tanks, hates trolls, enjoys building models, makes a mean grilled cheese sandwich, and will rarely pass up an opportunity to rib the Navy.

We also know that Martin, the deputy commander of Army Training and Doctrine Command (TRADOC), stands out among other general officers on Twitter since he's adopted a more personal approach to his social media, instead of the stiff, formal approach you might expect from a three-star. It's an approach we've seen from few other general officers, but one that certainly catches attention.

His quirky, goofy videos leave you with an impression that he may be one of the only people out there who is genuinely enjoying himself on Twitter.

And as you probably suspected, almost all of his tweets come straight from the source. He does get help from his staff occasionally, but he otherwise approaches Twitter much like anyone else.

“I said, ‘Hey, what is Twitter all about?’ And some of the younger folks said, ‘Well, you know, Twitter, you just kind of talk about what’s on your mind.’ I go, ‘No one’s going to be interested in what’s on my mind,’” Martin said, laughing.

He’s clearly gotten the hang of things since.

In a virtual interview with Task & Purpose — his Zoom background was a beautiful sunset, mine was…well, my wall — Martin said he decided to take the leap and join Twitter (which he jokingly referred to as “the wood-chipper”) because his boss, Gen. Paul Funk, was pushing leaders to get more involved on social media.

A highlight for him is getting an unfiltered perspective from soldiers he may otherwise not hear from. While he of course follows other Twitter-savvy generals like Fort Benning commander Maj. Gen. Pat Donahoe (@PatDonahoeArmy) and U.S. Forces Korea commander Gen. Robert Abrams (@DogFaceSoldier), some of his other favorite military accounts are those of younger soldiers.

“For me, the interesting part was all of the noncommissioned officers, soldiers, young company grade and field grade officers, are really active in that space,” Martin said, singling out accounts like @LethalityJane and @SNAFU_SGT. “What came to my mind is, ‘Holy cow, there’s a radio net out there where there’s all this chatter going on. And we haven’t been listening.’”

That’s how he tries to sell other generals on Twitter — ”If you start following these people, you’re gonna find out what everybody’s talking about.”

Sometimes that discussion can be productive and insightful, but other times it can revolve around, say, an Army lieutenant who made a Holocaust joke on TikTok. Martin said he tries not to “pile on” in those moments, “because it’s just not fair.

“At the end of the day, that’s not a fair fight if I’m picking on somebody,” he said. “If I pick on a four-star, that’s a fair fight.”

Though he hasn’t tried to pick on any four-stars yet, he has gotten messages before about some of the things he’s posted. In one instance, he said, he accidentally got ahead of the Army Secretary with a Twitter poll asking if the Army should remove photos from promotion board packages.

What he didn’t know was that the Army had already been studying the issue, and the secretary was a day away from announcing a change on that exact topic.

“So here’s my vote thing, and 75% of people who took the vote said ‘Get rid of the photos,’” Martin explained. “And that one got picked up by the Army Times. I found out about it when I opened up the [Early Bird Brief] and it says like … ‘DCG says get rid of the photos.’ And then the next day, the secretary pulls the photos. I mean, I had nothing to do with that.”

Nevertheless, it ruffled a few feathers.

“So now I’m talking about muffins,” he joked.

While his account is certainly a break from the mundane, it’s not all jokes and muffins. Because September is National Suicide Prevention and Awareness Month, many of his tweets lately have shared resources like the military crisis hotline, or encouraging soldiers to check in on one another — especially since the novel coronavirus (COVID-19) has limited personal interaction.

“We do not need a [RAND Corporation] study to tell us that COVID has accelerated this problem and exponentially increased the threat to soldiers,” he told Task & Purpose. “I’m sure you can see that in the statistics. …. It’s really like a pressure cooker right now with COVID and having to walk away from our face-to-face interaction, which is the heart of being a soldier, really.”

Don’t let COVID keep U from checking on your battle buddies. We may have to social distance but U can still pick up a phone/laptop/tablet and reach out to UR fellow Soldier. Stay connected, #BeThere #Suicidepreventionmonth #ArmyStrong pic.twitter.com/k0FygpLLll

He also talks frequently about diversity, something he believes should be embraced as a competitive advantage within the U.S. military.

“Inside of our formations, we’ve got a very diverse team of people; race, gender, sexual orientation, section of the United States that they come from, rich, poor — the whole nine yards. That’s really the strength of what we’ve got.”

Something you may not know about Martin, however, is that his family has an extensive history of military service. His official biography says his family's “military heritage harkens back more than ten generations to 1776.”

He told Task & Purpose that all he ever wanted was to “be like my Dad.”

Martin's father, an only child, quit high school during World War II to join the Navy — or he tried, at least. His mother had to sign the paperwork to allow him to join, and refused to do it. So, naturally, he wrote to his father, who was in the Navy at the time, asking for help.

“He wrote back, 'Mildred, sign the paper,'” Martin explained.

His father served during WWII, then finished high school and went on to college with the G.I. Bill. He joined the reserve officer training corps' and was later commissioned as an Army officer.

Something else you may not know about Martin is that he and his three brothers all joined the Army, and that he's the last of the four to still be on active duty.

But if there's one thing Martin wants you to know, it's that his unbridled enthusiasm for the Army, which you can easily find displayed on his Twitter page, is all real.

“I love my job, I love what I’m doing,” he said. “It’s all real, it’s not make believe. I’m not out there pumping propaganda.

“I’m dreading the day I have to hang up my uniform. Dreading that day.”

You can find Martin and say hello on Twitter, at his handle: @TradocDCG.