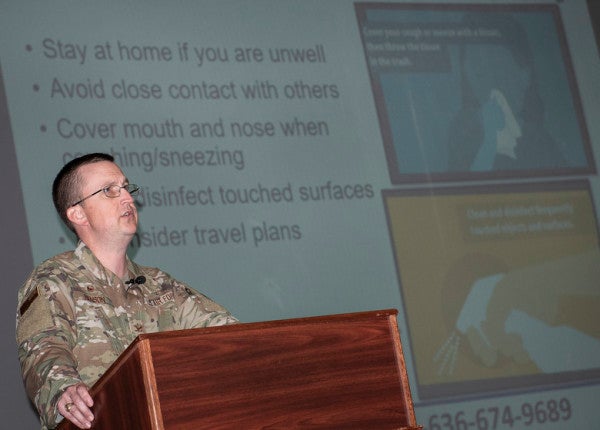 It's very important to keep your distance from everyone around you in an effort to slow the spread of coronavirus, according to the Centers for Disease Control, yet some military units have decided that the best way to pass word on how troops can keep themselves safe is to jam them into crowded theaters and chapels to talk to them about it.

On March 11, the World Health Organization declared the novel coronavirus (COVID-19) a pandemic. That same day, President Donald Trump spoke from the Oval Office about steps his administration was taking to slow the spread of the virus. The president's guidelines say people should do their part to slow the virus' spread by working from and staying home whenever possible, and avoiding social gatherings of more than 10 people.

But some military units just can't let go of their beloved all-hands meetings.

Take for instance officials at Eglin Air Force Base in Florida, who held a town hall meeting on March 11. A slide behind Col. Matthew Hanson noted that airmen should “avoid close contact with others,” which the hundreds of people in attendance perhaps thought was ironic.

On March 12, officials at Wright Patterson Air Force Base in Ohio held a town hall meeting led by Col. Tom Sherman, who mentioned that Ohio's governor had prohibited mass gatherings and base leaders were considering recommendations “that stay in concert with the governor's message,” according to Dayton Daily News.

Some Army units have not fared any better.

At Fort Leonard Wood, Mo., officials hosted a town hall on March 10 at the main post chapel. Maj. Gen. Donna Martin instructed people to wash their hands with soap and water for at least 20 seconds and “maintain six feet of distance from others when possible,” according to an Army press release, which was accompanied by a photo of people sitting close together.

The day prior, “hundreds of employees” at the Army's Aviation and Missile Command gathered to hear from their commander at Redstone Arsenal, Alabama. And over in Japan on Feb. 25, Army leaders gathered up to update workers on the virus, some of whom were wearing masks.

Meanwhile, the Navy announced over the weekend that coronavirus had made its way onto the USS Boxer. In response, the warship's leaders gathered up dozens of its officers and enlisted leaders in a cramped room to talk about proper social distancing, according to ProPublica. Seriously.

To be fair, plenty of military units are passing word along through the use of virtual town halls on Facebook Live. Another option is let people literally survive a meeting that could have been an email.

When asked Tuesday if the Pentagon would impose a moratorium on all hands formations and town halls, Defense Secretary Mark Esper said no.

“That has not been raised to me as a problem at this point in time,” Esper said during a Pentagon news briefing. “My view is the commanders have the authorities they need to take whatever precautions while at the same time ensuring the readiness of the troops and the capabilities of our formations.”

Although Defense Secretary Esper won't say it, I will. Commanders: Please stop holding all-hands meetings. Send an email instead. Your troops, and America, will thank you.