“The 'Rona respects our military customs." 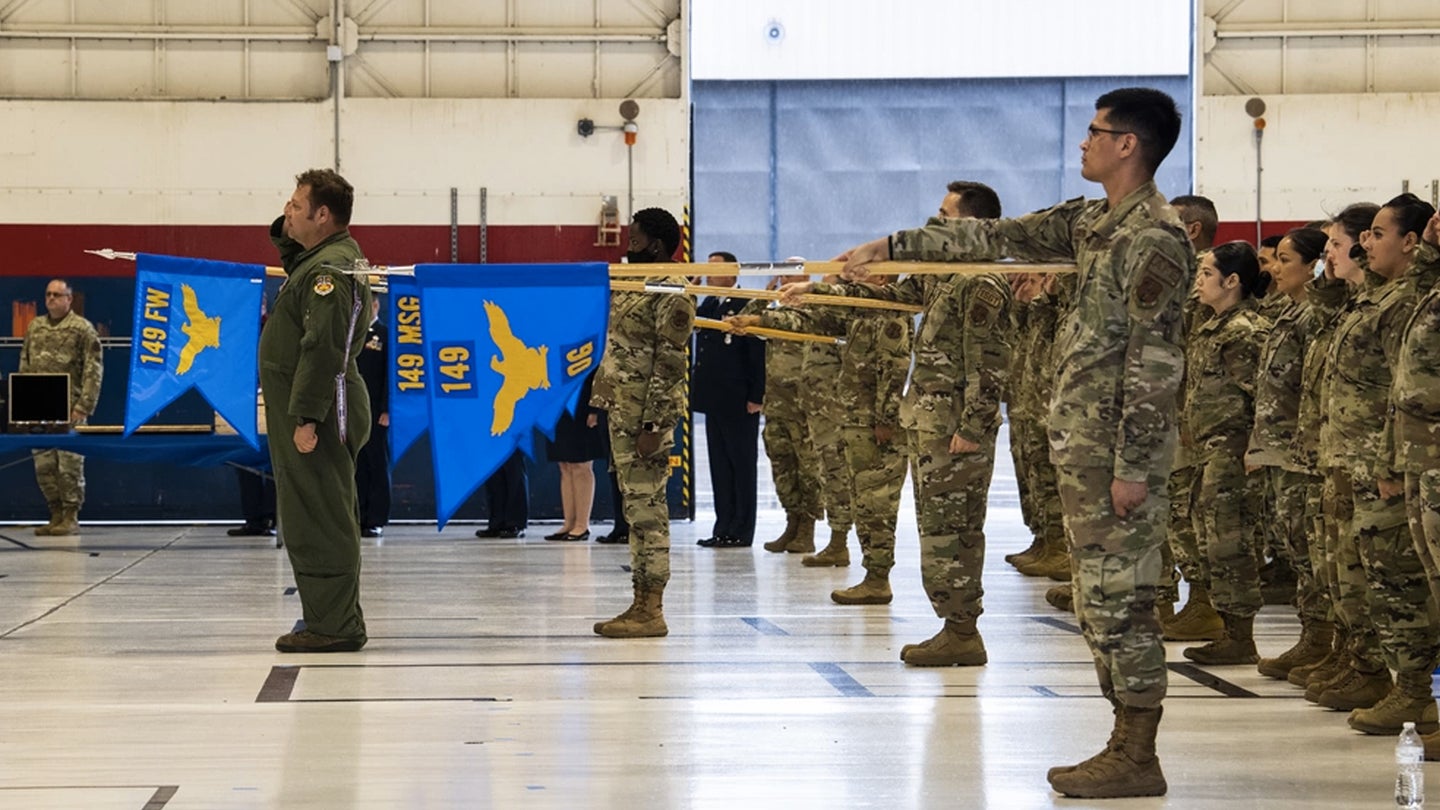 Retired Maj. Gen. John Nichols and Col. Raul Rosario sit during Rosario’s retirement ceremony at Joint Base San Antonio-Lackland, Texas, May 15, 2021. Rosario retired after 26 years of service and having served as the commander of the 149th Fighter Wing since 2018. (U.S. Air National Guard photo by Senior Airman Ryan Mancuso).
SHARE

A new COVID-19 policy introduced at Joint Base San Antonio, Texas on Tuesday encouraged base community members to limit indoor gatherings for social events but added a caveat for “official gatherings” such as “Commander’s Calls,” promotions and retirement ceremonies.

The policy was immediately criticized on social media, where some commenters joked that the coronavirus would get the message and stay out of official military business.

“The ‘Rona respects our military customs,” said one commenter on the Air Force subreddit.

“I got this email too and read that statement a few times,” said another. “What the fuck are [they] even doing?”

In a separate email sent to Task & Purpose, a base official emphasized that promotion and retirement ceremonies, while important, official events, are not mandatory.

“While those events are named as examples of official functions, attendance at – or even having the event – is not mandatory,” said Rob Strain, chief of media operations for the 502nd Air Base Wing at San Antonio. Commanders at all levels across the base can determine which official events should still occur and which should be downsized, made virtual, postponed, or canceled, Strain said.

“The installation commander’s guidance is simply that social events, defined as all events not considered official events, should be limited,” he added. “Additionally, current DoD guidance requires the component secretary approval for in-person meetings, conferences, or events with more than 50 attendees.”

On Thursday afternoon, the Pentagon announced that “Promotion and retirement ceremonies indoors should be discouraged or deferred when possible” through the rest of January on the Pentagon Reservation, which includes the Pentagon itself, the Mark Center Complex in Alexandria, Virginia, and the Raven Rock Mountain Complex in southern Pennsylvania.

The fact that there’s a global pandemic, now in its second year, forces leaders to make tough decisions about what functions can be skipped, and which ones need to continue. That said, some commanders have taken heat for appearing to arbitrarily pick and choose which events are COVID-19 safe. In fact, it has been a theme throughout the past two years.

For example, back at the start of the pandemic in March 2020, a number of military units held all-hands meetings with troops packed into theaters days after the World Health Organization and the Trump administration urged Americans to “avoid social gatherings in groups of more than 10 people.”

The Marine Corps also got in hot water for requiring Marines to still get haircuts in the middle of the pandemic, with social media footage showing Camp Pendleton Marines lined up around the base barbershop waiting to get their cuts. While the Pentagon eventually put a moratorium on large-scale meetings, other restrictions such as mask mandates and social distancing have ebbed and flowed over time as new COVID-19 variants such as Delta and Omicron emerge and increase the risk of people transmitting the virus.

Now that Omicron is surging across the country, many installations including Joint Base San Antonio are battening down the hatches. In a memo sent out on Tuesday, the base commander, Air Force Brig. Gen. Caroline Miller, said the base was upping its COVID-19 restrictions from Health Protection Condition Bravo to Bravo Plus. The measure includes rules like maintaining less than 40 percent normal occupancy in the workplace, limiting in-person meeting attendance as applicable, wearing masks properly to cover the nose and mouth, and enforcing social distancing. However, promotion and retirement ceremonies seem to have been spared.

While the policy states that commanders should “limit indoor social gatherings” it goes on to note that “Commander’s Calls and official functions to include promotion and retirement ceremonies are considered official gatherings, not social events,” Miller wrote. Within that guidance, commanders have room to limit the events for the health of their subordinates, Strain said.

“Service members’ promotions and retirements do deserve to be recognized, and, since they are official events, can still be held,” he explained. “However, leaders also consider proper force health protection precautions, including limiting the number of personnel present, masking as required, or considering virtual options.”

Promotion, retirement and change-of-command ceremonies are one of several — often tedious — events that service members attend during their time in the military. They are often regarded as boring, unnecessarily long, and at their worst, a public forum devoted to ass-kissing.

“Like many things in the Corps, it’s one of those things that we all do but literally no one wants to be there,” wrote Marine veteran Maximilian Uriarte, creator of the Terminal Lance comic strips, in a 2019 blog about promotion ceremonies. He’s hardly alone. When asked for their thoughts on retirement ceremonies, just one of the official events allowed, other vets at Task & Purpose offered the following responses: pointless, annoying, bordering on narcissistic. Though there was an acknowledgment that the ceremonies are significant for the individuals being honored, and their families, even if everyone standing in formation hates it.

While attendance at promotion and retirement ceremonies is not always mandatory in the Air Force, it is often highly encouraged. Let’s just hope everyone at Joint Base San Antonio is vaccinated!