“We have really good pre-clinical animal studies and we think the phase 1 trial data is going to be promising." 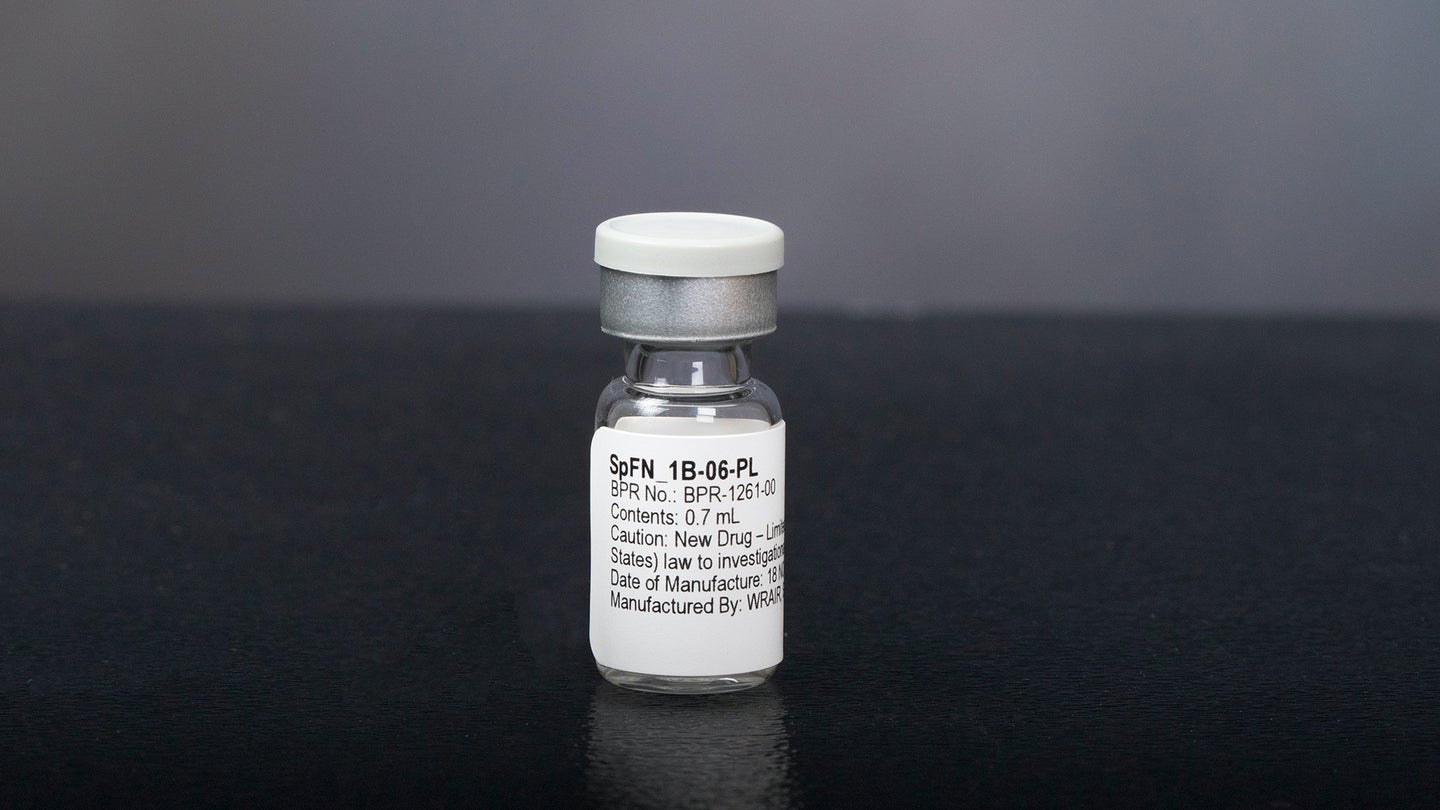 A vial of spike ferritin nanoparticle (SpFN), WRAIR’s COVID-19 vaccine. Built on a ferritin platform, the vaccine offers a flexible approach to targeting multiple variants of the virus that causes COVID-19 and potentially other coronaviruses as well. (U.S. Army/Mike Walters).
SHARE

The Army is developing a COVID-19 vaccine to fight all variants of the virus, including those that may not yet exist.

Researchers with the Walter Reed Army Institute of Research have spent the last two years developing a vaccine to fight all potential variants of the COVID-19 virus, Defense One first reported. While the Spike Ferritin Nanoparticle COVID-19 vaccine, called SpFN, still needs to go through phase 2 and 3 trials, the phase 1 human trials ended this month “with positive results that are undergoing final review,” according to Defense One. The new vaccine is intended to work against the current pandemic and will also act as “a first line of defense against variants of concern” and other related viruses in the future, according to a recent Army press release.

The SpFN vaccine has not been tested against the current Omicron variant of COVID-19.

“We have really good pre-clinical animal studies and we think the phase 1 trial data is going to be promising,” a Walter Reed Army Institute of Research official told Task & Purpose on condition of anonymity in order to speak frankly about preliminary results. “But we’re still weeks out from actually having that fully analyzed so we can publish it.”

In vaccine development, Army researchers took “a long-term approach, according to WRAIR’s website. The SpFN vaccine is “unique among other COVID-19 vaccines” in the way that it presents parts of the coronavirus spike protein to the immune system “many times over to elicit a strong immune response.”

It’s a “soccer ball-shaped protein,” according to Defense One, with “24 faces … which allows scientists to attach the spikes of multiple coronavirus strains on different faces of the protein.” Pre-clinical studies published last week by Science Translational Medicine showed that the new vaccine protected non-human primates from disease caused by the original novel coronavirus strain. And according to a press release from WRAIR, it even created “antibody responses” against variants from 2002.

Army scientists have been in the fight against COVID-19 from day one. Col. Robert O’Connell, the deputy commander of the Walter Reed institute, told Task & Purpose in March 2020 that his team began research on vaccine candidates in early January, a few months before the U.S. was hit by a wave of coronavirus infections in March.

“WRAIR is made for circumstances like this,” O’Connell said at the time. “This is why we exist, to be able to respond when there are crises that require research and development to provide solutions for the war fighter.”

“We’ve accomplished months’ and months’ worth of work in a very short amount of time,” Maj.(P). Douglas Ruhl, the ENT (ears, nose, and throat) clinic chief at Madigan, told Task & Purpose. “And that’s definitely due to … people recognizing the problem, recognizing this as a viable solution, and everyone at multiple organizations working together to help facilitate and see this through.”

The news of the new vaccine comes as the Omicron variant rapidly spreads throughout the country. Omicron spreads easier than the Delta variant, according to the Centers for Disease Control and Prevention, and can be spread even by those who are vaccinated, though vaccines can protect people against severe illness and hospitalization.

“The emergence of coronaviruses in human populations is accelerating,” said Dr. Kayvon Modjarrad, director of Emerging Infectious Diseases at WRAIR, “and we need to be prepared for the eventuality that the current coronavirus mutates or other coronaviruses arise.”

The development of the SpFN vaccine is “exciting … for our entire team and I think for the entire Army as well,” Modjarrad told Defense One.