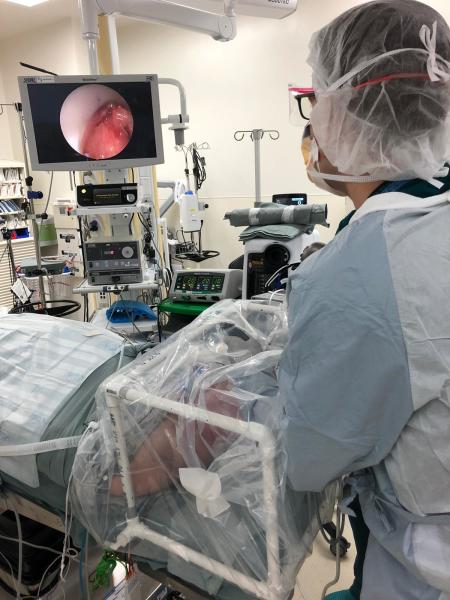 A team of Army doctors may have found the answer to the personal protective equipment (PPE) shortages impacting health care workers who are on the front lines of the fight against the novel coronavirus (COVID-19).

A new device, called the COVID-19 Airway Management Isolation Chamber (CAMIC), is the brain-child of military doctors and researchers at the Walter Reed National Military Medical Center in Maryland, the Madigan Army Medical Center in Washington State, and the Fort Belvoir Army Community Hospital in Virginia, among other institutions.

Maj(P). Douglas Ruhl, the ENT clinic chief at Madigan and a head and neck surgeon with the 47th Combat Support Hospital, told Task & Purpose on Tuesday that the group was looking to create “a cheap, effective, safe product” that would help contain the virus and keep both the patient and those helping them, safe.

The device is essentially a frame made from material like PVC piping, complete with a clear plastic covering, that is placed over a patient's head to isolate the particles they could spread from coughing or sneezing. The chamber cycles out air through holes in the piping — pushing in fresh oxygen on one side, and vacuuming out viral particles through the other side.

It can be attached to the bed if the patient is laying down, or sitting up, Ruhl said; it can even be mobile and attached to their shoulders, as long as they have an oxygen air delivery system and a suction attached.

The CAMIC could help protect nurses and doctors working on COVID-19 patients who are at risk of being infected themselves, partly because of PPE shortages, by providing an additional barrier and reducing their exposure to harmful particles.

“The bottom line is, it's one, a barrier — the bag itself separates the provider from the patient,” he explained. “And then two, it's an evacuation chamber so that when air and suction are turned on, it quickly removes the particles and cleans the air, so as they exhale, as they cough, as they sneeze, as they receive airway treatments or respiratory treatments, they're … now decreasing the chance of spreading [particles] into the room and exposing others.”

It all started when Maj(P). Steven Hong, the chief of head and neck surgery at Walter Reed National Military Medical Center, called “with an idea for a frame and a barrier,” Ruhl said. And it's been a blur of innovation ever since.

Ruhl and Maj. Paul Wistermayer, a senior resident at Madigan, have been testing different variations of the CAMIC since mid-March – tweaking things here and there, constantly communicating with the rest of the team about best practices, and testing the device over and over and over again.

And it's not just for COVID-19, though that is of course the immediate need; the device could be used in the future to protect against any number of viruses, in any kind of “austere setting.” The hope, Ruhl said, is to be able to use the CAMIC to create a negative-pressure environment around a patient's head in a place where there are no negative-pressure isolation rooms.

So could something like this be used somewhere like, say, an aircraft carrier jam packed with around 4,000 sailors on board?

“That could be a potential use, definitely,” he said.

Wistermayer told Task & Purpose that a crucial part of their testing was finding that even with a hole in the bag covering — like during a procedure, during which the doctor would have to have access to the patient — the negative-pressure environment inside the bag “actually pulls air in from the outside and traps particles inside, preventing escape of any particles inside.”

Though the CAMIC hasn't been approved by the Food & Drug Administration yet, Ruhl said the administration was involved early in the process of creating the device, and the team is hopeful they'll receive emergency use authorization soon.

“We've accomplished months' and months' worth of work in a very short amount of time,” Ruhl said. “And that's definitely due to … people recognizing the problem, recognizing this as a viable solution, and everyone at multiple organizations working together to help facilitate and see this through.”

“I've been very impressed with it.”