Sun's out, guns out 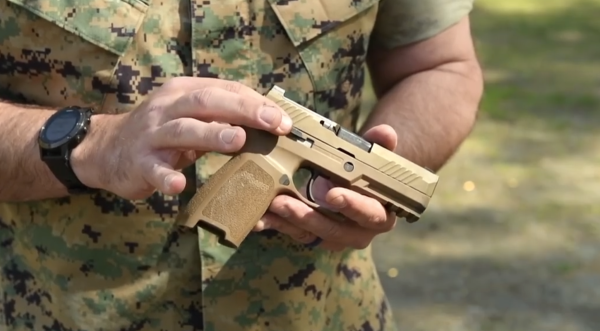 The Marine Corps has officially begun procurement of the Army's Modular Handgun System to replace its existing pistol arsenal, the service announced on Tuesday.

The M18 service pistol — a compact variant of the striker-fired M17 that, based on Sig Sauer's P320, the Army adopted under the MHS program in 2017 — will finally see fielding this fiscal year, according to Marine Corps Systems Command.

MARCORSYSCOM spokesman Maj. Ken Kunze had previously pegged the start of fielding at some time during the third quarter of fiscal year 2020, with a target completion date in “late 2023.”

The M18 will replace the Beretta M9 that the Corps adopted in 1985, as well as the selectively-fielded Glock 9mm M007 concealed carry and the beloved M45A1.

“The MHS improves on the precision and reliability of the legacy platforms, while also bringing with it new, more effective ammunition,” said Program Manager for Infantry Weapons weapons product manager Maj. Mike Brisker in a statement.

The Corps has been angling for a taste of the Army's new pistol since 2018 when the service's fiscal year 2019 budget request laid out plans to purchase 35,000 of the new MHS.

The M18 “provides modularity and greater shooter ergonomics over the current models which will allow for more accurate fire for military personnel of different sizes,” as the Corps's budget request put it at the time,

The service ended up buying roughly 30,306 M18s that fiscal year, according to budget documents.

The Corps has been rocking the M18 since February 2019, when Sig Sauer first delivered some 5,000 of the pistols to the Army, Air Force, Navy and Marine Corps for training, demonstration, and evaluation.