Marine Maj. Jose J. Anzaldua Jr. spent more than three years as a prisoner of war during the height of the Vietnam War. Now, more than 45 years after his release, Sig Sauer is paying tribute to his service with a special gift 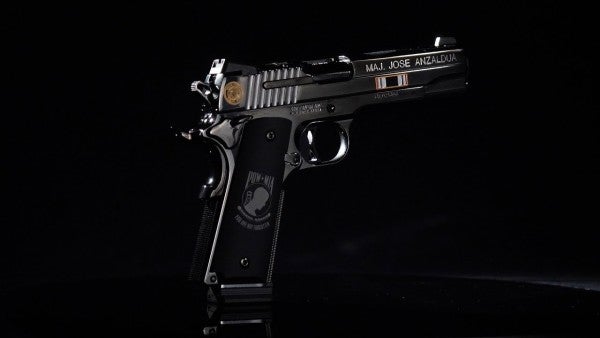 Marine Maj. Jose J. Anzaldua Jr. spent more than three years as a prisoner of war during the height of the Vietnam War. Now, more than 45 years after his release, Sig Sauer is paying tribute to his service with a special gift.

Sig Sauer on Friday unveiled a unique 1911 pistol engraved with Anzaldua's name, the details of his imprisonment in Vietnam, and the phrase “You Are Not Forgotten” accompanied by the POW-MIA flag on the grip to commemorate POW-MIA Recognition Day.

The gunmaker also released a short documentary entitled “Once A Marine, Always A Marine” — a fitting title given Anzaldua's courageous actions in the line of duty

Born in Texas in 1950, Anzaldua enlisted in the Marine Corps in 1968 and deployed to Vietnam as an intelligence scout assigned to the 2nd Battalion, 5th Marine Regiment, 1st Marine Division.

On Jan. 23, 1970, he was captured during a foot patrol and spent 1,160 days in captivity in various locations across North Vietnam — including he infamous Hỏa Lò Prison known among American POWs as the “Hanoi Hilton” — before he was freed during Operation Homecoming on March 27, 1973.

Anzaldua may have been a prisoner, but he never stopped fighting. After his release, he received two Bronze Stars with combat “V” valor devices and a Prisoner of War Medal for displaying “extraordinary leadership and devotion to his companions” during his time in captivity. From one of his Bronze Star citations:

Using his knowledge of the Vietnamese language, he was diligent, resourceful, and invaluable as a collector of intelligence information for the senior officer interned in the prison camp.

In addition, while performing as interpreter for other United States prisoners making known their needs to their captors, [Anzaldua] regularly, at the grave risk of sever retaliation to himself, delivered and received messages for the senior officer.

On one occasion, when detected, he refused to implicate any of his fellow prisoners, even though severe punitive action was expected.

Anzaldua also received a Navy and Marine Corps Medal for his heroism in December 1969, when he entered the flaming wreckage of a U.S. helicopter that crashed nearr his battalion command post in the country's Quang Nam Province and rescued the crew chief and a Vietnamese civilian “although painfully burned himself,” according to his citation.

After a brief stay at Camp Pendleton following his 1973 release, Anzaldua attended Officer Candidate School at MCB Quantico, Virginia, earning his commission in 1974. He retired from the Corps in 1992 after 24 years of service.

Sig Sauer presented the commemorative 1911 pistol to Anzaldua in a private ceremony at the gunmaker's headquarters in Newington, New Hampshire. The pistol's unique features include: