Robot dogs are coming to an Air Force base near you 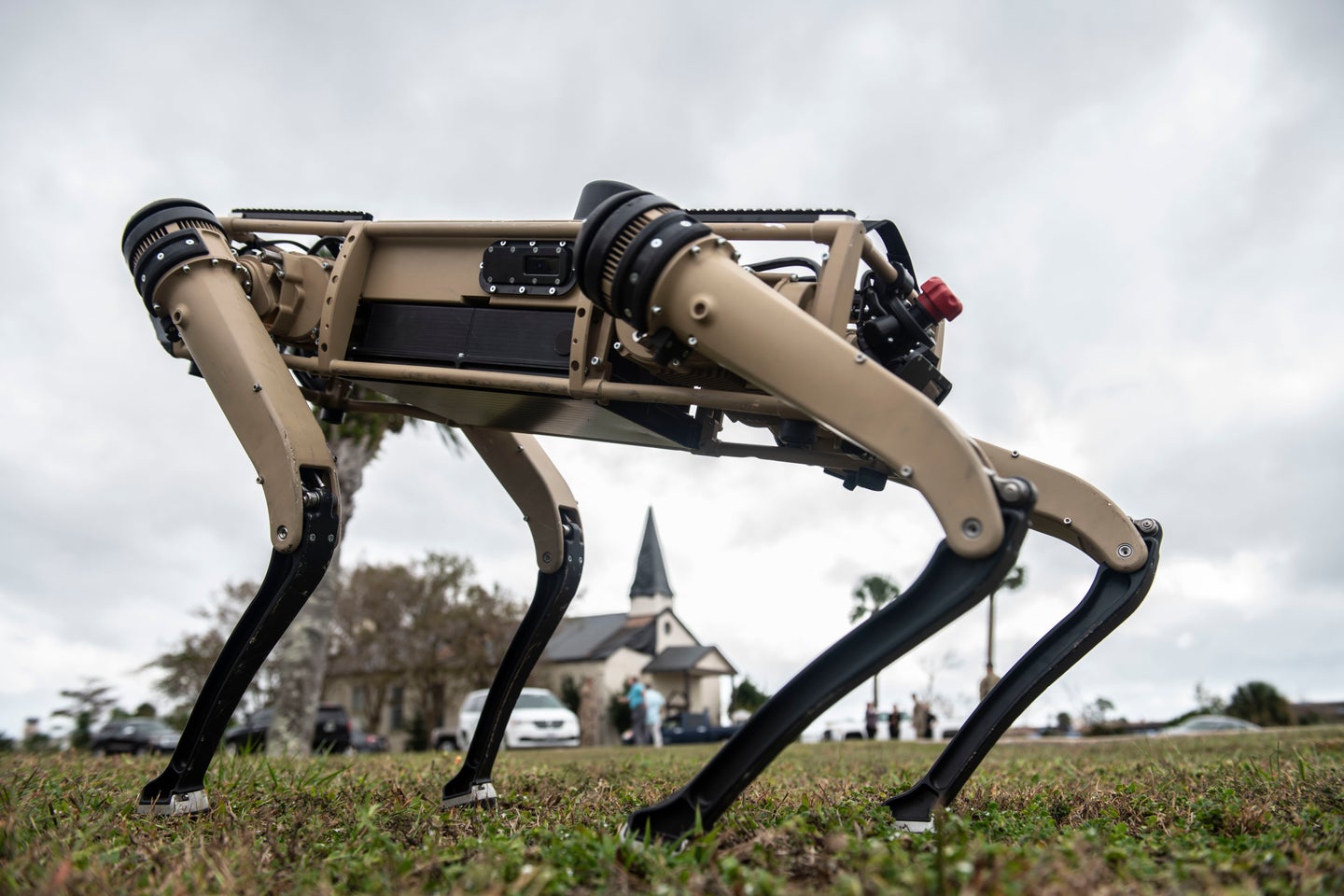 The Air Force is working on deploying teams of semi-autonomous robot dogs to bases across the country in an effort to enhance installation security and safety, the service announced on Tuesday.

Developed by defense contractor Ghost Robotics as part of an Air Force Research Laboratory contract awarded back in April, the cybernetic canines “will aid in patrolling operations and, in doing so, allow …. defenders to focus their efforts on security actions that require a physical presence,” according to the Air Force.

The first team of robot dogs showed off their capabilities during a Tuesday event at Tyndall Air Force Base in Florida where the 325th Security Forces Squadron has worked with Ghost Robotics for more than a year to implement an effective system, according to the Air Force.

“We are very excited,” 325th SFS Maj. Jordan Criss commander said in a statement. “We are the first unit within the Department of Defense to use this technology for enhanced security patrolling operations.”

The robot dogs tested at Tyndall are known as Vision 60, a military-grade version of Ghost Robotics’ Quadrupedal Unmanned Ground Vehicle platform designed for intelligence, surveillance, and reconnaissance (ISR) missions, distributed communications, and “persistent security,” as The War Zone put it.

Each robot dog will patrol a set path under the watchful gaze of a Security Forces Electronic Security Sensor System noncommissioned officer in charge, according to the Air Force, allowing security forces to focus on training and overall readiness rather than routine patrols.

The news of the first official deployment of a robot dog team comes just months after the Air Force publically debuted capability during a test of the service’s next-generation Advanced Battle Management System at Nellis Air Force Base in Nevada in September.

During that exercise, a team of airmen flew from Buckley Air Force Base in Colorado to Nellis via a 109th Airlift Wing LC-130 Hercules aircraft and secured a ‘remote’ airfield while robot dogs provided visual assessments of the area, allowing airmen to maintain a tighter perimeter to the aircraft.

While details are scarce regarding the specific capabilities tested on the Vision 60 robot dogs during the demonstration, photos published to the Defense Visual Information Distribution Service of the Nellis exercise showed airmen operating with multiple variants of the platform.

“Our modular design even supports field swapping any sub-assembly within minutes,” according to Ghost Robotics. “Strategic partners can build solution-specific Q-UGVs for virtually any use-case with their choice of sensors, radios, and even size the robot to suit specific requirements by licensing our reference designs.”

“These dogs will be an extra set of eyes and ears while computing large amounts of data at strategic locations throughout Tyndall Air Force Base,” Criss, the 325th SFS commander, said in a statement. “They will be a huge enhancement for our defenders and allow flexibility in the posting and response of our personnel.”