Actor Mark Wahlberg will be visiting troops overseas to plug Wahlburgers, a fast-casual restaurant chain owned by the actor and his two brothers, Donnie Wahlberg, and chef Paul Wahlberg. 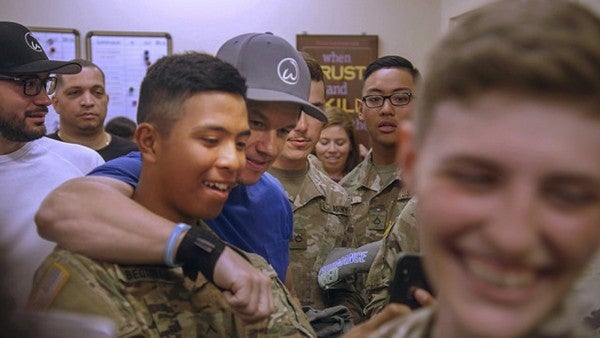 Actor Mark Wahlberg will be visiting troops overseas to plug Wahlburgers, a fast-casual restaurant chain owned by the actor and his two brothers, Donnie Wahlberg, and chef Paul Wahlberg.

According to Stars and Stripes, Paul and the artist formerly known as Marky Mark will be at Ramstein Air Base in Germany on Sunday to plug the opening of the first Wahlburgers restaurant on a military installation. The burger joint will be replacing Johnny Rockets at the Kaiserslautern Military Community Center's food court.

The new location is the result of a partnership between Wahlburgers and the Army and Air Force Exchange Service. Initially, it seemed as though the first Wahlburgers on a military base would be at Joint Base Lewis-McChord in Washington, but Julie Mitchell, a spokeswoman for AAFES told Stripes that the opening at Lewis-McChord has been pushed back to 2020.

“The Wahlberg family is incredibly proud of this partnership,” Mark Wahlberg said in a 2018 Department of Defense statement about the chain expanding to military bases.