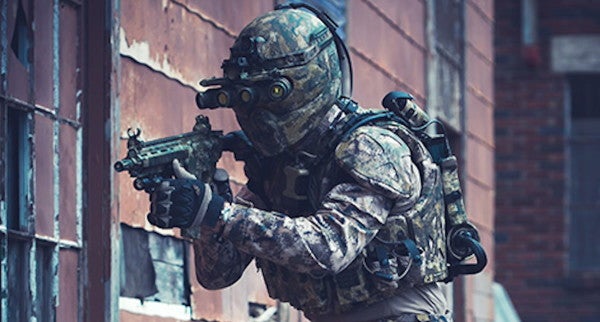 The new SOCOM armor offers protection from small-arms fire over 44 percent of the body compared to the 19 percent offered by the standard infantry body armor, including an operator's shoulders, obliques, forearms, and groin, Hawkins said.

While SOCOM officials confirmed in February that the full TALOS Mk 5 combat suit prototype wasn't even close to ready for prime time, Hawkins told Task & Purpose that the command is currently exploring 10 subsystems developed under the Joint Acquisition Task Force-TALOS for “further maturation and testing” — chief among them the lightweight polyethylene armor.

“The armor is currently under combat evaluation by SOF units in the field,” Hawkins told Task & Purpose.

SOCOM isn't the only command exploring the potential applications of lightweight polyethylene. In 2017, researchers at the Army's Natick Soldier Research, Development and Engineering Center (NSRDEC) unveiled an experimental combat helmet made of ultra-high-molecular-weight polyethylene (UHMWPE) that offered a 40 percent weight reduction compared to existing ballistics options.

Then in Sept. 2019, the Army Research Lab announced a new material developed from a UHMWPE-based compound that's 14 times stronger and eight times lighter than steel, a material that Army Research Office officials described as “easier to cast or mold into complex shapes, providing versatile protection for soldiers, vehicles, and other Army assets.”

Hawkins declined to elaborate if the Army's past work with UHMWPE had explicitly informed the development of the new SOCOM armor.

“This is a material that was part of a collaborative effort during the TALOS project, but that's not to say that this was the only effort,” Hawkins said. “With regards to the services and what they've taken on, there's some crossover … our acquisition folks go to the same conferences.”

Speaking at SOFIC this past May, Col. Alex MacCalman, the outgoing JATF-TALOS engineering chief, stated that the Army had expressed interest in adopting the new post-TALOS protective system, which offers “better protection against AK-47 rounds,” as National Defense reported at the time.

But because SOCOM is currently evaluating the new armor, however, Hawkins could not definitively compare the armor's protective capacity to that of the Army's Improved Outer Tactical Vest, stating only that “it offers increased protection against small arms threats.”