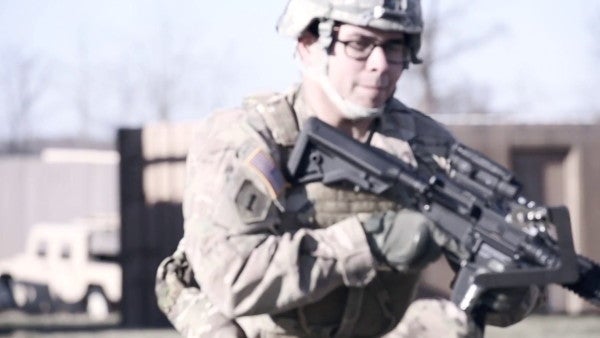 The system “combines a lightweight modular gyro-stabilization device to enable the operator to engage targets with more accuracy,” Hawkins told Task & Purpose. “It's essentially a system that has a multirole capability against air-ground-and maritime threats.”

“Not only are we talking the stabilization device that enables the operator to engage with greater accuracy, but detecting tracking and targeting and classifying targets prior to engagement,” Hawkins added. “There's potential for an auto-detect feature. The specific capabilities aren't sketched out yet, but we've identified several for further maturation and testing.”

Hawkins declined to specify if that counter-UAS solution would include either a kinetic or a directed energy solution, noting that the system remains in its earliest stages.

First introduced in 2013, SOCOM's TALOS suit purported a slew of capabilities integrated into a unified, armor-plated exoskeleton. But while SOCOM officials confirmed in February that the TALOS Mk 5 combat prototype wasn't ready for prime time due to a lack of suit-wide interconnectivity, Hawkins told Task & Purpose that the command is currently exploring 10 subsystems for “further maturation and testing.”

The Army has been working on its own “third arm” for several years. In May 2018, the Army Research Laboratory published footage of soldiers operating 22-pound M249 and 25-pound M240B machine guns on the mechanical harness at an urban training exercise site at the Aberdeen Proving Ground in Maryland.

“We get comments from soldiers who tell us different things about the way it feels on their body… about the way it redistributes the load,”ARL engineer Dan Baechle
said in an Army release at the time. “Some like it, some give us tips about the ways it could be improved, and we're using that input to improve the device and improve the design so that it not only works well, but it also feels good.”

While it's currently unclear how much SOCOM's own third arm borrows from the ARL effort, we do have a dream as to what it should look like if it actually sees fielding in the future: