The Distinguished Flying Cross is rarely awarded, let alone awarded twice on the same day to two members of the same fighter squadron, but that's exactly what happened for two A-10 pilots who saved troops under fire in Afghanistan during missions in 2008 and 2010 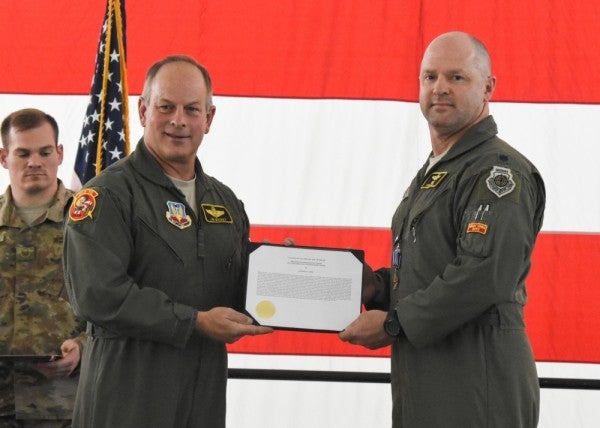 The A-10 Warthog and its brave pilots solidified their reputation as the infantry's guardian angels earlier this month when two Missouri-based airmen received one of the military's most prestigious medals for their role in saving dozens of grunts, engineers and special forces under heavy fire in Afghanistan.

The Distinguished Flying Cross is rarely awarded, let alone awarded twice on the same day to two members of the same fighter squadron, Lt. Col. Rick Mitchell, commander of the 303rd Fighter Squadron, told more than 200 onlookers at the ceremony at Whiteman Air Force Base on Nov. 2.

According to the Air Force, the two pilots — Maj. John “Sapper” Tice and Lt. Col. Tony “Crack” Roe — earned their awards in separate close-air support missions. Roe, who had received two DFCs already, earned his third while on a 2008 mission to support a resupply convoy in a mountainous area southeast of Bagram Airfield.

Roe and his wingman, the now-retired Brig. Gen. James Mackey, observed eight U.S. military vehicles on the road, four of which were disabled by rocket-propelled grenades. The platoon commander on the ground could speak with Roe over the FM radio frequency, but without a dedicated joint terminal attack controller on deck, the ground force lacked personnel trained to help the pilots identify enemy fighters who were already in danger-close range.

“Troops in contact danger close with no JTAC to do all that, that's a big deal,” Mackey said.

Time was running short: the platoon was still under fire and they were running low on ammunition. Roe sprung into action, coordinating with the platoon commander to mark the enemy positions with a smoke grenade and declaring the situation Emergency Close Air Support, thereby assuming full responsibility for any attack.

Roe then ordered all the soldiers to get in their vehicles so he could start his assault, but he was about to hit another challenge: his gun wasn't aiming properly. His first few rounds went high because his targeting elevation system, which helps aim the A-10's 30mm cannon, was malfunctioning.

“He recognized right away that his system that allows him to tell what the elevation was wrong, so he manually puts in the elevation,” said Mackey. “Next pass he unloads seven rockets about 40 meters away from the friendlies and they ceased fire.”

Over the course of the next hour, Roe's accurate firepower saved the 16 soldiers trapped there. The sortie was well-timed: before Roe and Mackey arrived, the ground troops were down to their last clip of ammo and getting ready to charge the enemy-occupied hill, according to the Air Force story.

As the battle intensified, Tice flew directly into range of the hostile small arms fire, where he made six low passes targeting their positions with the 30mm cannon.

“I'm humbled to be amongst these two,” said Col. Mike Schultz, commander of the 442nd Fighter Wing, at the ceremony. “I don't feel quite adequate for even touching the medal. It's that big of a deal. Sapper, Crack, brothers, well done.”

Several of the soldiers who Roe and Tice saved were in the audience, and they stood for their own ovation. The pilots also gave a shout-out to the crews who keep their planes running.

“They had support from the entire team,” said Mitchell of Roe and Tice. “If you're sitting out there wondering if you make a difference–you do. The A-10 is an amazing aircraft, serviced by remarkable Airmen and is flown and deployed by remarkable attack pilots.”