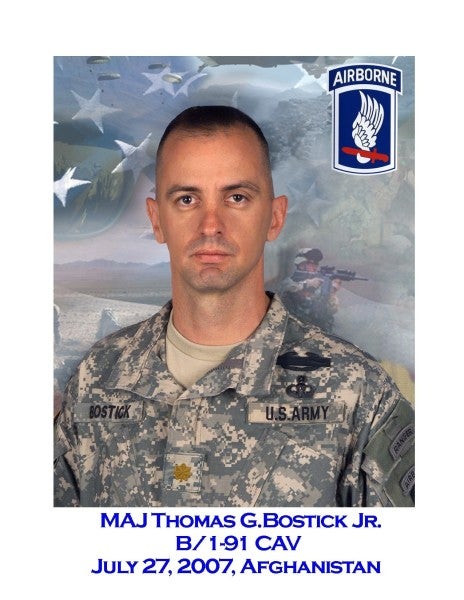 On March 1st, Maj. Thomas Bostick will have his Silver Star award posthumously upgraded to the Army's second-highest award, the Distinguished Service Cross, according to the Pentagon.

Bostick led B Troop, 1st Squadron, 91st Cavalry Regiment, 173rd Airborne Brigade and was previously awarded the Silver Star for his heroic acts during an insurgent attack in Afghanistan in 2007.

“Major Bostick…without regard to his own personal safety, placed himself in front of an overwhelming enemy force to provide covering fire to enable the Paratroopers in his command post to displace to more defensible terrain,” according to his Silver Star citation. “He willingly sacrificed his life so they could live.”

B Troop was able to inflict “severe punishment on a numerically superior enemy force” due to Bostick's actions, which ultimately took his life, the citation reads.

WATCH NEXT: President Trump Presents the Medal of Honor