"I'll continue to serve until the Army tells me I can't serve." 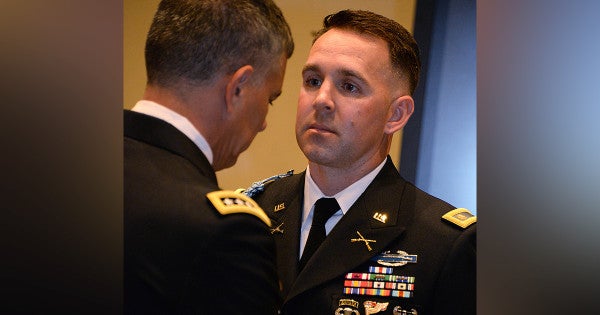 A soldier's Silver Star — which he originally believed to be “too much recognition” despite receiving it for playing hot potato with a live grenade and saving at least six others — has been upgraded to the Distinguished Service Cross.

Maj. Nicholas Eslinger received the award on May 3rd by Army Training and Doctrine Command head Gen. Stephen Townsend, the Army announced, who called Eslinger “an inspiration to all of us.”

Eslinger received the original award for heroic actions in October 2008 when he was deployed to Iraq as a platoon leader in Company C, 2nd Battalion, 327th Infantry Regiment, 101st Airborne Division. While on patrol in Samarra, Iraq, an enemy combatant threw a grenade at then-2nd Lt. Eslinger and his soldiers, which Eslinger immediately moved towards to protect those with him. When it didn't detonate, Eslinger picked up the grenade and threw it back to the enemy, where it detonated. The combatant was not killed in the blast, and was then captured by the soldiers.

Army Chief of Staff Gen. Mark Milley gave the orders to have Eslinger's Silver Star upgraded in February 2019. Townsend said when he heard of the upgrade, “I immediately told the chief and vice, I want to do that one. I was there when he got the (Silver Star), I want to do this one.”

Townsend told Eslinger at the ceremony that his reaction that day in Iraq is “hardwired into your DNA as a leader … I am honored to serve in the Army that produces such leaders.”

Eslinger was with his father, Bruce Behnke, his wife Calisse, and his 7- and 5-year-old daughters at the ceremony.