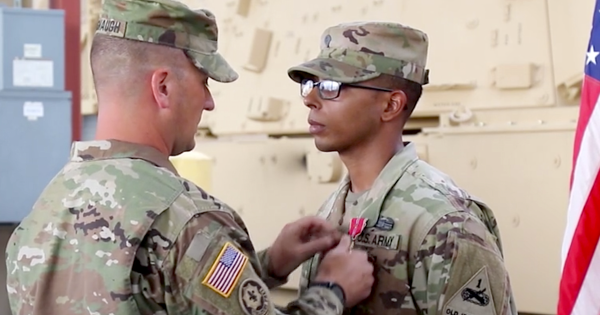 The Army awarded a Bronze Star with a valor device to an artillery soldier for risking his life to save wounded personnel before obliterating enemy positions with 60mm mortar rounds during an intense engagement with ISIS fighters in Afghanistan.

Jackson was conducting a clearance operation in Afghanistan's Nangarhar province on Aug. 16, 2017, as an infantry “uplift” soldier in support of a U.S. Special Forces Operational Detachment A and the Afghan military's 8th Special Operations Kandak when the group came under heavy fire from ISIS fighters.

That's when things got out of control, according to Jackson's citation: “As the dismounted element finished clearing the compound, an explosive weapon of unknown origin suddenly detonated, wounding 30 personnel and ultimately killing four,” including Green Beret Staff Sgt. Aaron Butler.

Jackson immediately sprang into action after the blast, moving wounded U.S. and Afghan personnel to a casualty collection point and even performing CPR on “a critical American casualty” as ISIS fighters continued to target the joint element from multiple positions with gunfire and RPGs.

After readying the wounded for evacuation, Jackson went on the offensive. Moving through the hailstorm of gunfire, he grabbed a 60mm mortar from his vehicle and destroyed the primary ISIS position with six well-placed shells, remaining exposed to enemy fire for more than an hour.

“Jackson had no choice but to fight from an exposed position in front of his vehicle,” Fausnaugh said during the award ceremony. “He was vulnerable, but had good field to fire and courageously held his ground.”

“We can talk about the most modern pieces of equipment in the world — tank, Paladin, M88 — all important tools, but none more important than you, represented right here,” he said, gesturing to Jackson. “He represents you.”

SEE ALSO: Most Americans Don't Think The Wars In Afghanistan And Iraq Were Worth It — Including The Vets Who Fought In Them

WATCH NEXT: Watch A Coastie Give Zero F*cks As He Leaps Aboard A Moving Narco Sub And Pounds On The Hatch