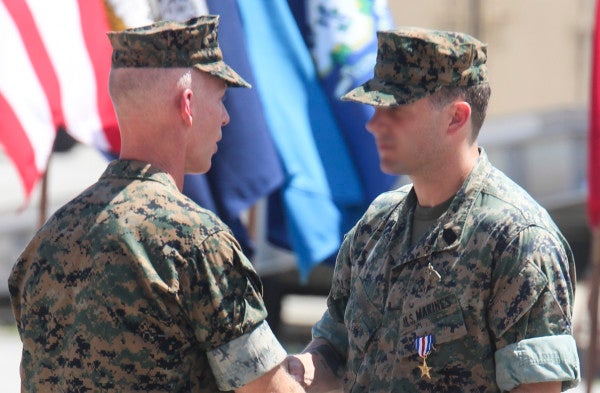 A Marine Raider who assaulted a bunker and recovered a wounded Afghan soldier during a four-hour firefight in Afghanistan last year was one of several special operations Marines recognized for valor when he was awarded the Silver Star last week.

During a July 10 ceremony at Camp Lejeune, a master sergeant and critical skills operator, whose name was withheld by the service, was awarded the nation's third-highest award for valor for his actions while serving as a team chief with the 2nd Marine Raider Battalion.

The unnamed Marine was one of eight Raiders recognized for their actions that day, which resulted in three Bronze Stars and four Navy and Marine Corps Commendation Medal with “V” devices in addition to the Silver Star award.

Though specific details of the engagement were withheld, along with the names of the other Raiders, the award citations for the Silver and Bronze Star medals, which were provided to Task & Purpose and are included below, paint a picture of a hellish firefight against an entrenched enemy force.

During a partnered
heliborne raid into enemy-occupied terrain in southern Afghanistan, the master sergeant led his Marines and Afghan partner forces during four hours of close-combat against more than a dozen Taliban fighters.

From the Silver Star citation:

Under withering small aims fire,
he led an assault across 30 meters of open terrain to attack an enemy bunker
trading point blank gunfire with the occupants and employing hand grenades
to eventually eliminate the threat.

As the partner force began to clear another
structure, the lead soldier was shot and lay helpless at the entrance. Climbing
onto the building, [the master sergeant] employed an explosive roof charge, and after
it detonated, he jumped onto the terrace where the Afghan soldier lay. While
completely exposed to 8 barricaded fighters only a few feet away, he heroically pulled the wounded man to cover in a valiant attempt to save his life.

The citation goes on to credit the Raiders' “aggressiveness and indomitable fighting spirit” for the “complete destruction of the enemy, including 14 fighters with only a single friendly casualty.”

“The entire team remained calm, concise over the radios,” the master sergeant said in a recent Marine Corps news story. “They were controlled, efficient, synchronized, and ultimately, brutally lethal to end that fight.”

The Bronze Star citations offer a little more detail on what happened that day, with one detailing how the team commander, a major, coordinated air and ground support while under fire before exposing himself to “point blank enemy enemy fire and employed two fragmentation grenades that detonated less than five meters away.”

Though the events of that day remain largely shrouded in secrecy, these awards help illustrate the the outsized role that special operations forces like Marine Raiders have taken in the ongoing war in Afghanistan.

“One thing I did want to recognize is that this was not an isolated incident,” the master sergeant said at the ceremony. “This is the incident we are recognizing these guys for, but this happened multiple times, with the same, if not, very similar circumstances and many of the Marines being honored today did the exact same actions and performed just as well multiple times. You guys humbled me throughout the entire deployment. It was an honor to serve with you.”

The Silver Star and Bronze Star with “V” citations can be read in their entirety below: