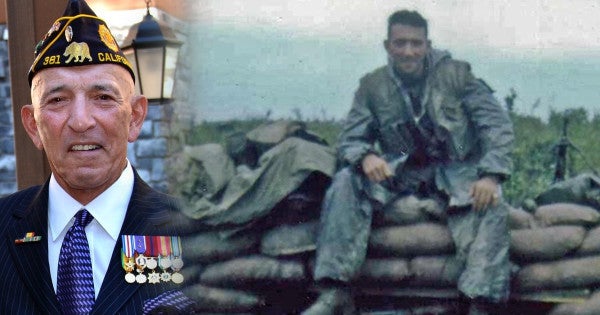 A former U.S. Marine sergeant who ignored his own wounds during a 1966 battle in Vietnam, continuously exposed himself to enemy fire, and picked up an enemy grenade and threw it away before it exploded should be considered for the Medal of Honor, according to a letter from a U.S. senator to the Secretary of the Navy.

Sen. Dianne Feinstein (D-Calif.) sent a letter on June 8 to Navy Secretary Kenneth Braithwaite urging him to consider an award upgrade for Joseph T. Getherall, 73, a former Marine squad leader who received the Silver Star in 2007 after a more than 40-year delay attributed to “a paperwork issue,” according to Feinstein.

“I respectfully request that Mr. Getherall's case be given a full and fair consideration to ensure actions potentially deserving of a higher honor have not been overlooked,” wrote Feinstein in the letter obtained by Task & Purpose on Thursday, which claimed there was “new evidence” that warranted a closer look by the service secretary.

During an early morning battle on Dec. 22, 1966, Getherall and his company of Marines with 3rd Battalion, 26th Marine Regiment were attacked by a battalion of Vietcong fighters that outnumbered them 25 to one.

“It was like a sea of them,” Getherall told Task & Purpose during an interview in November.

Before the assault, Getherall said, enemy fighters launched 82mm mortar rounds at the Marines' position, one of which landed just 10 feet away, peppering him with shrapnel and knocking him unconscious.

Getherall “steadfastly refused” medical treatment, however, according to his citation for the Silver Star. Instead, Getherall repeatedly moved across open terrain, exposed himself to intense enemy fire, and helped resupply his men with ammunition and directed their defense.

Charged with adrenaline during the battle, Getherall told Task & Purpose that at one point he noticed a flare overhead, then saw a Vietcong soldier about to throw a grenade. Though Getherall shot and killed the man, the soldier was able to release the Chinese-made grenade, which landed between two Marine foxholes about 15 feet in front of the sergeant.

Getherall then screamed “grenade!” as a warning to his Marines and ran toward the deadly device.

“He personally killed several enemy attackers with his rifle fire, including an enemy soldier who had just thrown a grenade,” the citation reads. “While warning his men, Sergeant Getherall was able to get to the grenade, pick it up, and throw it back towards the enemy before it exploded.”

Additionally, Getherall “fearlessly moved across the hazardous open terrain under intense enemy fire” to drag a wounded Marine to safety, according to the citation.

In the letter, Feinstein noted that Getherall refused medical evacuation despite being injured early in the fight, that he saved “several” Marines who were injured or trapped, and, most notably, “he also jumped on a grenade, throwing it away in time to save lives, but he sustained shrapnel injuries to his leg in the process.”

“It was during one of the enemy assaults that Sgt. Getherall showed up just as I ran out of ammo,” Sylvia wrote. “He killed two Viet Cong who were just off to my side and I didn't see them. There is no doubt they would have overrun my position and killed me had not Sgt. Getherall shown up when he did.”

Sylvia recounted much of what took place that night. Like others in Getherall's squad who submitted statements, Sylvia spoke of “what looked like hundreds” of enemy fighters, and said he personally witnessed the grenade incident, recalling that Joe ran toward it to jump on it. “He then picked it up and started to throw it,” Sylvia wrote, adding that there was little doubt that Joe neutralizing the grenade had saved his life.

Feinstein isn't the first lawmaker to urge an upgrade for Getherall. In Feb. 2007, Rep. Grace Napolitano (D-Calif.), introduced legislation to award him the Medal of Honor. The bill stalled in committee.

In March 2016, Marine Gen. Joseph Dunford wrote Getherall a letter printed on Chairman of the Joint Chiefs of Staff letterhead.

“You are the type of leader I sought to emulate from the time I joined the Corps,” Dunford wrote, telling Getherall that he had reviewed his case and had forwarded it to the Commandant of the Marine Corps.

“I honestly cannot predict what will happen with the award upgrade request, but please know you have the deepest appreciation and admiration of all those with whom you have served, and those who have followed after you — Joe Dunford included.”

And another former Chairman of the Joint Chiefs, Air Force Gen. Richard Myers, wrote in a 2011 email that there was “a strong argument” Getherall's actions warranted the Medal of Honor. “It sure looks like more than a Silver Star medal to me,” Marine Gen. Peter Pace, who led an infantry platoon in Vietnam and later replaced Myers as chairman, wrote in agreement.

Similarly in 2017, Sen. John McCain (R-Ariz.) and Rep. Edward Royce (R-Calif.) pushed then-Defense Secretary James Mattis to give an “honest and complete evaluation” of Getherall's actions. Rep. Duncan Hunter (R-Calif.) urged the same, though none of their efforts resulted in an upgrade.

“Getherall's case has received thorough and fair review by three former Commandants of the Marine Corps and two former Secretaries of the Navy, in consultation with their awards boards and senior advisors,” Acting Navy Secretary Sean Stackley wrote in a letter to Royce in August 2017. “All concluded the Silver Star Medal was appropriate recognition.”

Yet despite having a number of high-ranking supporters, according to Getherall, officials in charge of reviewing awards have long denied requests for an upgrade, and flatly rejected the Sylvia letter as containing “new evidence” despite its claim that Getherall killed two enemy soldiers and saved Sylvia's life, which went unmentioned in previous award recommendations.

Getherall supporters have alleged misconduct on the part of officials with the Marine Corps awards branch and lodged a complaint with the Inspector General. But in Sept. 2019, a Navy awards board determined that, “even taking into consideration the allegations of impropriety at the Headquarters Marine Corps level, that SECNAV's award of the Silver Star, and the appeal and subsequent review of that award in 2007, were executed without error or injustice,” according to a letter sent to Getherall provided to Task & Purpose.

In November, Task & Purpose submitted a public records request to the Marine Corps for documents related to Getherall's case. The Corps has not yet provided any relevant documents.

When contacted by Task & Purpose on Friday, Getherall seemed pessimistic over whether the award would be upgraded. “It's happened so many times,” Getherall said, noting previous lobbying efforts by other lawmakers for an upgrade. “I hope it gets to the Secretary of the Navy. But we'll see.”

A spokeswoman for the Navy Secretary could not immediately respond to questions from Task & Purpose.

Related: 10 Incredible Photos Of The Heroes Who Fought The Vietnam War