A new documentary project aims to tell the story of Marine Cpl. Jason Dunham who gave his life to save his fellow Marines. 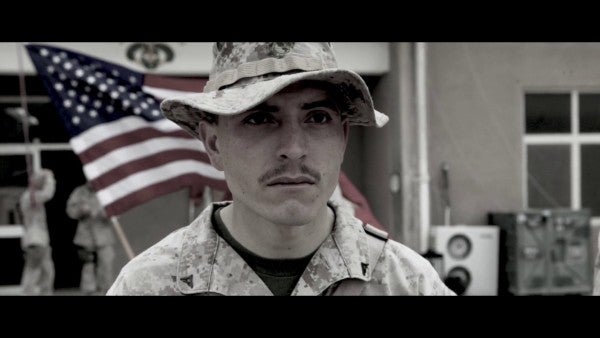 More than 15 years ago, Marine Cpl. Jason Dunham gave his life to save his fellow Marines on the streets of Husaybah, Iraq when he leaped upon a grenade. In 2007, he became the first Marine since the Vietnam War to be awarded the Medal of Honor.

In the years since his death, his story of courage and sacrifice has been told and re-told. His Medal of Honor citation is read to Marine recruits during the Crucible at boot camp. And his name adorns the USS Jason Dunham, where his dress blue uniform rests in a clear display case on the quarterdeck, a solemn shrine to a young man who gave his life for his brothers in arms.

Now, Marines who served with Dunham are sharing his story in their own words, and a small group of military veterans and film makers are helping them do it as part of The Gift, a crowd-funded documentary film chronicling his life, and legacy.

On April 14, 2004, Dunham was leading his squad in Husaybah, Iraq, searching for fighters who had just launched an attack on their battalion commander’s convoy.

The Marines stopped a line of cars to conduct a hasty search, looking for insurgents attempting to flee — or regroup for another attack. Something caught Dunham’s eye — a white SUV, three vehicles back. As he made a beeline for the vehicle, his Marines, Pfc. Kelly Miller and Lance Cpl. Bill Hampton, followed suit.

As they neared the vehicle, they spotted weapons in the back seat — AKs and RPGs. Just then, the driver leaped out and attacked Dunham. The two men fell to the ground in the struggle. As Miller and Hampton rushed to their squad leader’s aid they heard Dunham call out: “No, no! Watch his hand!” as a grenade rolled to the ground. The pin had been pulled, and the spoon was gone.

Without hesitation, Dunham threw himself on the live grenade, covering it with his Kevlar helmet and body, absorbing the full impact of the blast. He survived the initial explosion, but succumbed to his wounds on April 22, 2004. Dunham was posthumously awarded the Medal of Honor on Jan. 11, 2007.

The Gift aims to not only tell the story of Dunham’s sacrifice, but intends to explore the indelible marks he left on those who knew him, and how they carried on after his death. Based on the trailer, the story will be told through present-day interviews with Dunham’s family, and the Marines he served alongside — including those whose lives he saved: Kelly Miller and Bill Hampton.

“What we do with what has been given is how we honor those who gave. Take what you’re given, make it count, and don’t stop,” Hampton says in the trailer.

The film seems to be as much about the heroism on display that day as it is about the long hard road that came afterward.

“I turned into a person who took all that emotion, all of that guilt, all that anger, all that frustration, and I put it into a little box and I just fucking buried that bitch as deep as possible inside of me,” Miller says in the trailer.

“What do you say to the parents of a guy who gave his life for you?” he asks, before adding at a later point: “Jason gave me my life for his. So I have to be good enough to accommodate both.”

The decision to create the documentary was made years ago, when director and producer David Kniess met with Dunham’s fellow Marines to begin the process. But the wounds were still too fresh, so the project was put on hold, until now, Kneiss told Task & Purpose.

“This story is very personal for me,” said Kniess, who met Dunham and his family prior to the Marine’s deployment to Iraq. “But it also comes with immense responsibility, and an obligation to get the story right, for the Dunhams, the Marines of Kilo 3/7 and for Cpl. Dunham.”

The documentary is still in its early stages — with a few initial interviews used to produce the trailer — but to move forward they need to secure funding, which they’re attempting to do through an Indiegogo campaign. To date The Gift has raised $12,060 of its target goal of $300,000 with just 49 days left.

Beyond the cast of principal characters — family and friends of Dunham’s, as well as those he served with — the documentary team is predominantly made up of military veterans, like Kniess, who served in the Navy. The decision to create a veteran-made film about one of the most heroic acts of sacrifice in the Iraq War was intentional, Kniess said.

“Veterans understand what ‘service to country’ means as well as the sacrifice our military makes while serving,” he told Task & Purpose. “Veterans have a strong work ethic, pay attention to the details, have a great attitude and they’re up for the challenge. But most importantly, they understand the importance of telling this story.”

Those interested in learning more about The Gift can visit the film’s Indiegogo campaign here.