The Oorah was in the air Wednesday as President Trump awarded the Medal of Honor to retired Marine Sgt. Maj.... 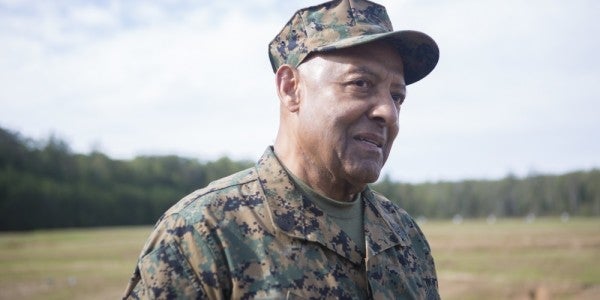 The Oorah was in the air Wednesday as President Trump awarded the Medal of Honor to retired Marine Sgt. Maj. John Canley for his “unmatched bravery” during the historic battle to retake the city of Hue during the Tet Offensive.

Canley was initially awarded the Navy Cross for his heroism from Jan. 31 to Feb. 6, 1968. A gunnery sergeant at the time, he assumed command after his company commander was wounded and repeatedly fired up his Marines to take enemy strongholds.

At a White House ceremony, Trump said it was his “incredible privilege” to present Canley with the nation's highest military award for valor.

“John's fellow Marines have described him as, 'A Marine warrior;' and I can see it, 'who is bigger than life and beyond the reach of death,'” Trump said at a White House ceremony. “He is truly larger than life.'”

Addressing the Marine veteran personally, the president continued, “America is the greatest force for peace, justice, and freedom the world has ever known because of you and people like you. There are very, very few people like you, John.”

Canley, who used his brother's paperwork to enlist in the Marines at the age of 15, proved to be an exceptional warrior during the house-to-house fighting against more than 6,000 North Vietnamese and Viet Cong troops, Trump told the audience.

In the battle for the St. Joan of Arc School and Church, Canley charged into heavy enemy machine gun fire, using rocket launchers to drive the communist forces from their stronghold, the president said.

“The enemy didn't know what the hell happened,” Trump said. “After an intense day of fighting, John and his fellow Marines liberated the school. But John wasn't done yet. Despite sustaining serious injuries – very, very serious injuries – he continued to face down the enemy with no thought for his own safety. John waged seven straight days of unrelenting combat, personally saving the lives of more than 20 Marines.”

One of those Marines had been wounded and was about to be run over by a tank when Canley charged through the enemy fire to carry him to safety, Trump said.

When the White House announced in September that he would receive the Medal of Honor, Canley issued a statement saying he was accepting the award on behalf of those he served with in Vietnam.

“Their bravery and sacrifice is unparalleled,” Canley said.

It took an act of Congress for Canley to receive the Medal of Honor.

Rep. Julia Brownley (D-Calif.) wrote the necessary legislation to upgrade Canley's Navy Cross after Defense Secretary James Mattis wrote her in December that Congress would have to waive the law requiring Medals of Honor to be awarded within five years of the actions justifying the award.

“It is a very significant day for our country and there is no question that Sgt. Maj. Canley is more than worthy of our nation's highest award,” Brownley told Task & Purpose on Wednesday.

“He is a wonderful person. He is very humble. With respect to this recognition and receiving the Medal of Honor, he will never talk about his role in it, but he only speaks of his fellow service members – the Marines who served with him. He loves his Marines – he loved them then, he loves then now.”

SEE ALSO: Netflix Just Announced A 'Medal Of Honor' Series That Recreates Some Of The Most Incredible Acts Of Valor From WWII To Post-9/11