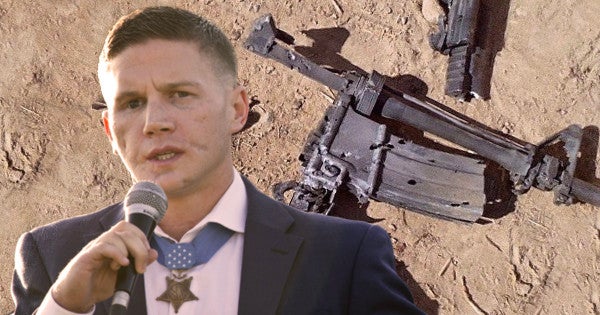 Kyle Carpenter casually posted the photo, and Forrest Gump quote, to Facebook last Thursday which showed all that remained of his M4 after the attack that led to his Medal of Honor award. The Marine Corps infantryman was awarded the Medal of Honor for his heroism in Marjah, Afghanistan on Nov. 21, 2010, when he jumped on an enemy grenade that was hurled onto his rooftop security position, saving the life of another Marine by absorbing most of the blast.

“Lance Corporal Carpenter and a fellow Marine were manning a rooftop security position on the perimeter of Patrol Base Dakota when the enemy initiated a daylight attack with hand grenades, one of which landed inside their sandbagged position,” reads Carpenter's Medal of Honor citation.

“Without hesitation, and with complete disregard for his own safety, Lance Corporal Carpenter moved toward the grenade in an attempt to shield his fellow Marine from the deadly blast. When the grenade detonated, his body absorbed the brunt of the blast, severely wounding him, but saving the life of his fellow Marine.”

The lighthearted post quickly drew responses on Facebook from readers who joked that it just needed a bit of CLP and it'd be good as new, while others wondered if he had to tuck a few bills into the magazine well to get the armory to take it, or how he gets his pants on over his gigantic brass balls every morning — okay, nobody asked that last one, but it's a fair question.