The Tet Offensive began on January 30 as the North Vietnamese occupied the city of Hue. U.S. Marines spent nearly a month fighting a brutal urban battle to retake the city — which was 80% destroyed by the battle's end 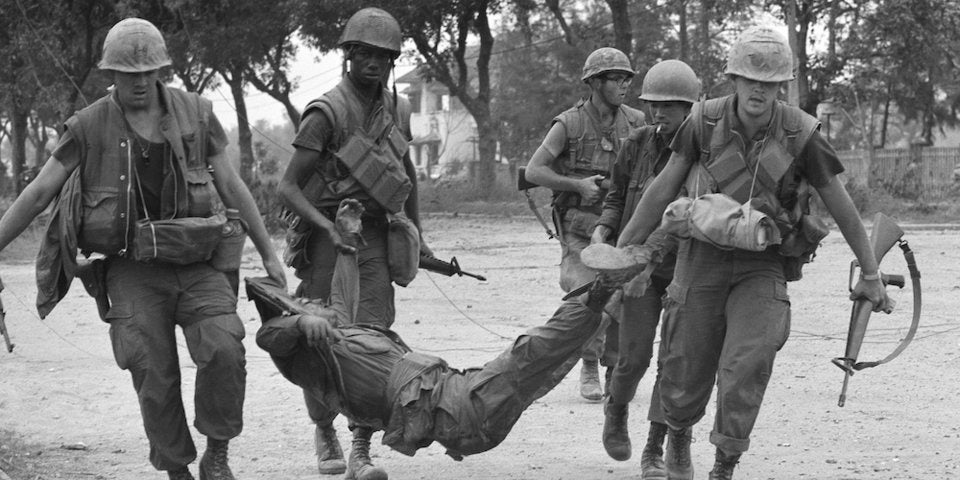 At the end of January in 1968, the Viet Cong launched an offensive that turned the tide of the Vietnam War.

The Tet Offensive began on January 30 as the North Vietnamese occupied the city of Hue. U.S. Marines spent nearly a month fighting a brutal urban battle to retake the city — which was 80% destroyed by the battle's end, according to H.D.S. Greenway, a photographer embedded with the Marines during the war.

An estimated 1,800 Americans lost their lives during the battle.

But in the midst of the chaos, five men who faced harrowing circumstances risked their lives to save those of their comrades — and earned the nation's highest award for courage in combat, the Medal of Honor.

During one of the ceremonies honoring these heroes, President Richard Nixon remarked on the incredible risks they took.

“They are men who faced death, and instead of losing courage they gave courage to the men around them,” he said.

Gunnery Sgt. John Canley, suffering from shrapnel wounds, led his men in the destruction of enemy-occupied buildings in Hue City.

When his men were injured, he leapt over a wall in plain sight — twice — to carry them to safe positions.

He was awarded the Medal of Honor in October 2018, over 50 years after he risked his life for his men.

He flew his helicopter through enemy fire, guiding the damaged aircraft so he could rescue wounded comrades and fly them back to safety.

His bravery saved the lives of five wounded soldiers.

A photo shows Sgt. Alfredo Gonzalez with Gunnery Sgt. John Canley during the Vietnam War. Both have earned the Medal of Honor for actions taken during the brutal Battle of Hue City. (U.S. Marine Corps/Cpl. Tessa Watts0

Sgt. Gonzalez and his unit were among the first to deploy into the Viet Cong-occupied Hue City.

Through five days of fighting, Gonzalez repeatedly exposed himself to direct enemy fire, leading his men despite his personal wounds.

Although he died during the battle, his actions ensured his comrades' survival.

Medal of Honor recipient Joe Hooper listens as his citation is read during the award ceremony in March 1969. (National Archives/YouTube)

Hooper suffered extraordinary wounds as he fought during the Battle of Hue City, during which he destroyed numerous enemy bunkers and raced across open fields under intense fire to save a wounded comrade.

Staff Sergeant Clifford Sims, once an orphan, flung himself on top of an explosive device to save his platoon

Mary Sims accepts the Medal of Honor on behalf of her husband, Staff Sergeant Clifford Sims, who died during the Battle of Hue City. (National Archives)

During an intense search-and-rescue mission, Staff Sgt. Sims heard the click of a booby trap as his platoon approached a bunker.

Shouting for his team to stay back, Sims jumped on top of the device to absorb the explosion.

:51 years ago, Vietnamese forces launched the Tet Offensive and changed how America saw the Vietnam War

SEE ALSO: 21 Of The Most Epic Combat Beatdowns From U.S. Military History

WATCH NEXT: Medal Of Honor Recipient Flo Groberg On The Civil-Military Divide