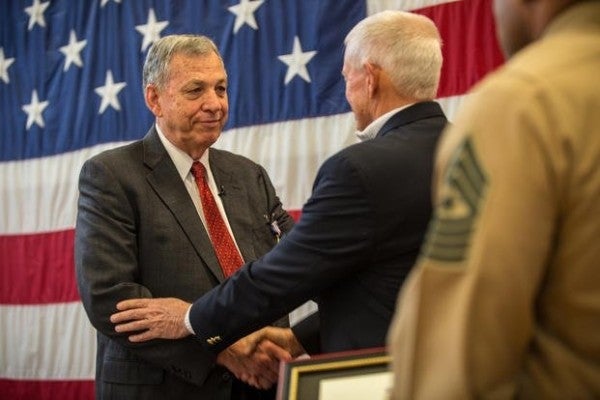 A retired officer whose leadership helped save soldiers and Marines pinned down by North Vietnamese fighters in 1967 received the third-highest award for valor on Friday for his heroism more than five decades ago.

Retired Maj. Edward Wright, who served with 3rd Battalion, 3rd Marine Regiment, was presented with the Silver Star 51 years after his heroic actions during the Vietnam War. The Lima Company platoon leader is credited with leading a 30-man reaction force against North Vietnamese fighters on Aug. 21, 1967, to save an Army convoy and other Marines after his own company commander's team was ambushed.

“Lieutenant Wright expeditiously organized his platoon and led them on a rapid two-mile combat march to the ambush site,” the Silver Star citation states. “Recognizing contact with the enemy was imminent, he tactically deployed his force into concealed positions moments before the enemy unleashed a ferocious attack with automatic weapons, rockets and grenades.”

Despite the enemy fire, Wright and his men forged ahead. He tenaciously assaulted, the citation states, clearing enemy positions as he advanced toward hand-to-hand combat.

“As the battle came to close combat, [Wright] rallied his men and ordered them to fix bayonets and continued his aggressive assault.”

Wright, who received the medal during a ceremony in Portland, Oregon, is one of several Vietnam-era combat heroes recognized in recent years. Retired Marine Sgt. Maj. John Canley was awarded the Medal of Honor in October for his actions during the 1968 Battle of Hue City. A year ago, former Army Capt. Gary “Mike” Rose also received the nation's highest valor award for his actions in Laos during the Vietnam War.

Retired Marine Maj. Gen. John Admire, who presented Wright his award, told the San Diego Union Tribune in 2013 that companies that served during the Vietnam War were so fragmented that there was no one left to write nominations for valor awards.

“That was one of the great injustices of the time,” Admire told the paper during a Silver Star award ceremony for two other Marine Vietnam veterans.

Marines and the Medal of Honor

The Medal of Honor was established by President Abraham Lincoln on Dec. …