Kyle Carpenter says he never went a day at the University of South Carolina without a professor or fellow student... 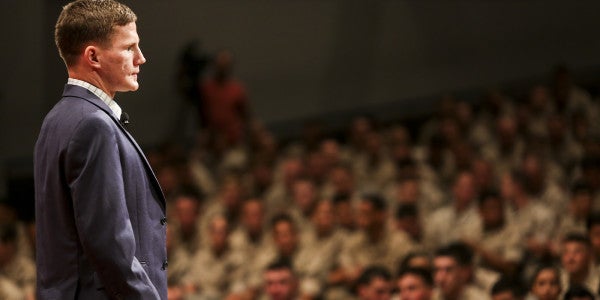 Kyle Carpenter says he never went a day at the University of South Carolina without a professor or fellow student thanking him for his sacrifice as a U.S. Marine.

But he admits he also never encountered a moment more special than his last as a USC student, when thousands of his classmates and their families gave the 28-year-old Medal of Honor recipient a rousing standing ovation at graduation.

“That was one of the most incredible moments since I woke up at the hospital and realized I had a second chance at life,” Carpenter said Monday, minutes after receiving his bachelor’s degree in international studies.

Carpenter, from Gilbert, S.C., is best known for his throwing himself onto a live grenade in Afghanistan in 2010 to save a fellow Marine’s life. Miraculously, he survived, even though his heart stopped three times as doctors worked to save him.

The grenade blast took Carpenter’s right eye and injured his left, broke both his eardrums and shattered most of his teeth and lower jaw. He spent five weeks in a coma and the next two years in the hospital, undergoing dozens of surgeries to put his body back together.

Four years later, and a year after enrolling at USC in August 2013, he was awarded the nation’s highest military honor – the Medal of Honor – at 24 years old by then-President Barack Obama.

The award kicked off a new wave of publicity. He was featured on David Letterman and by virtually every major news outlet in America.

His grueling recovery was recounted in magazine features and in documentaries. He made the motivational speaking rounds, appearing before USC’s sports teams, veterans groups and Fortune 500 companies.

He backpacked across Europe, led Williams-Brice Stadium in a “Game-Cocks!” chant took an Honor Flight to Washington, D.C., in 2015.

Carpenter isn’t sure what is in store for him as he hits the job market. He is sure he will continue his motivational speaking and working with veterans groups.

And he wants to say thank you, to his professors and his fellow students.

“My college experience was like everyone else’s. I learned a lot. I gained a new perspective on the world and on people that I’m so thankful and appreciative for,” Carpenter said. “I was first and foremost a fellow Gamecock and friend before a Medal of Honor recipient. I just had a four years that is too special to put into words.”