Medal of Honor Recipient Clint Romesha: People Should Stop ‘Armchair Quarterbacking’ What They’d Do In A School Shooting

Medal of Honor recipient Clint Romesha says people need to stop “armchair quarterbacking” what they would do during a school... 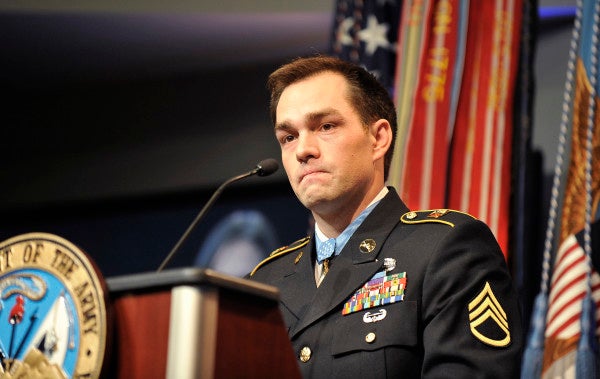 Medal of Honor recipient Clint Romesha says people need to stop “armchair quarterbacking” what they would do during a school shooting.

In an appearance on CNN's The Lead with Jake Tapper, Romesha said all those would-be heroes should “stop talking about it” if they've never been in a situation like that. Although the question from Tapper was vague and mentioned “some people” were saying they would have run into Marjory Stoneman Douglas High School to confront the gunman, President Donald Trump said earlier this week he would have “run in there,” even if he were unarmed.

Romesha — who is a Medal of Honor winner (yes, I know, he's a recipient and you don't “win” it) — knows a thing or two about running into fire. During a coordinated attack on his outpost in Afghanistan in 2009, Romesha ran repeatedly through enemy fire to tend to wounded soldiers, lead his men, and kill enemy fighters.

It's one of those…I never looked to go be a hero. I guess I don't feel like I've ever been a hero. I'm just someone who did a job. Until you're actually put in that experience, that situation, it's all about timing. We're all going to be faced with something in our lives. But to hear someone say in hindsight — armchair quarterbacking — 'Yeah I would've ran in there and would've done this, that, and the other,' well until you do it, you know, stop talking about it.