FBI: No Evidence So Far That Burning Wreck At Travis Air Force Base Was A Terrorist Attack

It is too early to tell if a fiery car crash at Travis Air Force Base’s main gate on March 21... 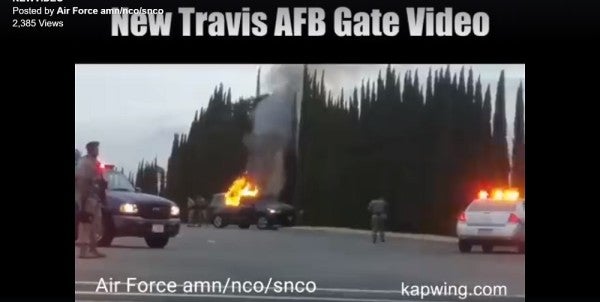 It is too early to tell if a fiery car crash at Travis Air Force Base’s main gate on March 21 was an act of terrorism, an FBI official told reporters on Friday.

Investigators have identified the driver of a KIA minivan, which burst into flames as it approached the gate and then crashed after it passed through, as 51-year-old Hafiz Kazi. A legal immigrant from India, Kazi has lived in the United States since 1993, said Sean Ragan, special agent in charge of the FBI’s Sacramento field office.

Kazi was found dead inside the burned-out vehicle along with five propane tanks, three one-gallon containers of gasoline, several lighters and three phones, Ragan told reporters during a news conference. His van was already on fire as it approached the base.

First responders were unable to remove Kazi from the burning van because the doors were locked, Ragan said. Investigators do not know yet how Kazi died or why he was driving to the base with so many flammable materials.

Although CBS News initially reported that the incident is being treated as a possible terrorist attack, Ragan said investigators have not found any links between Kazi and any foreign terrorist groups, adding, “That’s something that we will, obviously, investigate.”

“Before an investigation is done, we can’t determine why exactly he had those propane tanks in there; why he was on fire; what his intentions were, so to speak,” Ragan explained.

Kazi had worked as a taxi driver in the past but it was not immediately clear if he was employed at the time of his death, Ragan said. Investigators have not found any connections between Kazi and the base.