What we know so far about the Nashville bombing

“If you can hear this message, evacuate now,” it said repeatedly. Then, it erupted. 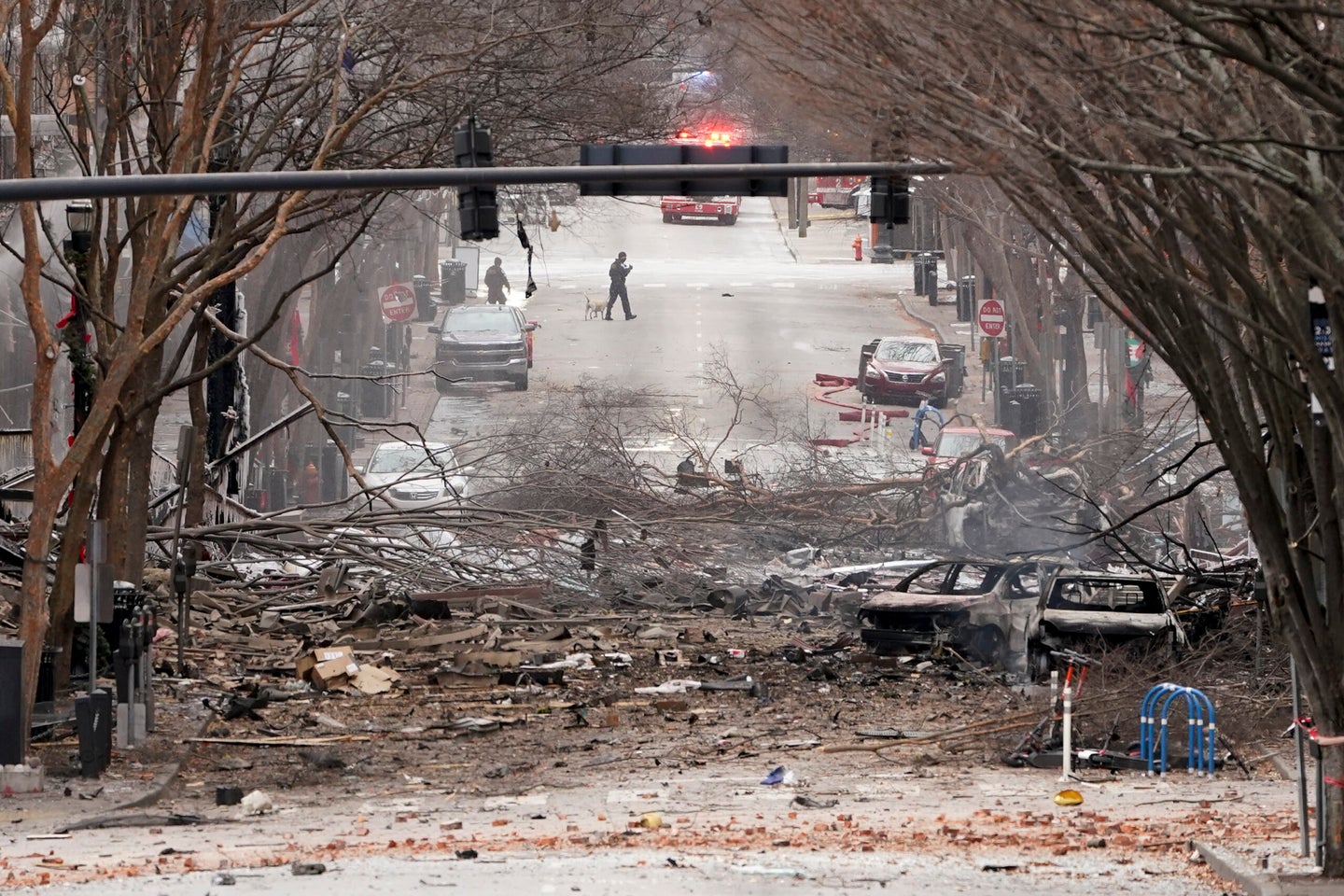 Emergency personnel work near the scene of an explosion in downtown Nashville, Tenn., Friday, Dec. 25, 2020. Buildings shook in the immediate area and beyond after a loud boom was heard early Christmas morning.(AP Photo/Mark Humphrey).
SHARE

We know that a parked recreational vehicle exploded in downtown Nashville on Christmas morning and caused “widespread communications outages” throughout Tennessee and Kentucky but do not yet know who set it off or why.

Just before 6 a.m. on Friday, Nashville police officers responded to a report of shots fired on Second Avenue and found a parked white RV blaring a prerecorded message warning that the vehicle would explode. Police say the RV arrived in the area at 1:22 a.m.

At least six police officers were hailed as “heroes” by the city’s mayor for acting swiftly to evacuate people from nearby buildings before the bomb went off. Witnesses told The Washington Post the vehicle began broadcasting its warnings about 15 minutes before it exploded at about 6:30 a.m. “This vehicle will explode in 15 minutes. And then 14 minutes, and 13 minutes,” reported Betsy Williams, who lives in an apartment nearby.

The vehicle eventually played its final message, according to security camera footage. “If you can hear this message, evacuate now,” it said repeatedly. Then, it erupted.

It’s unclear whether anyone was inside the RV at the time of the explosion, though police chief John Drake said investigators found tissue nearby they believe could be human remains. The blast injured three people and caused extensive damage to apartments, historic buildings, and more than 40 businesses in the area, a tourist district featuring shops, restaurants, and honky-tonks, according to The New York Times.

“The whole neighborhood shook,” Lily Hansen, who was sitting on her couch in her second-floor apartment a few blocks away, said to The Times. “It just ripped my entire apartment apart,” said Buck McCoy, who lives less than a block away and said his home was destroyed. “There wasn’t one part of the house that wasn’t shook.”

The explosion reverberated far beyond the downtown area. Shrapnel and bomb fragments ripped through the windows and walls of the AT&T central office housing network equipment and a telephone exchange, according to the Associated Press, which caused communications outages in two states and led to a temporary halt of flights out of Nashville International Airport. “Several police agencies reported that their 911 systems were down because of the outage, including Knox County, home to Knoxville about 180 miles (290 kilometers) east of Nashville,” the AP reported.

The bomb apparently cut off power to “critical equipment” in the building that AT&T engineers are currently working to restore. The company said on Saturday it had brought in two portable cell sites in an effort to restore wireless communications.

The FBI field office in Memphis is leading the investigation, according to The Times. The ATF has also been called in to work alongside the FBI and Nashville police. No motive or suspects have been announced. Investigators are likely looking into vehicle history and studying the explosives that were used in an effort to identify the perpetrator, according to a retired former FBI agent.

Featured photo: Emergency personnel work near the scene of an explosion in downtown Nashville, Tenn., Friday, Dec. 25, 2020. Buildings shook in the immediate area and beyond after a loud boom was heard early Christmas morning. (AP Photo/Mark Humphrey)