A local ice cream man apparently doesn't want to hear the sound of freedom produced by F-35 fighter jets. The... 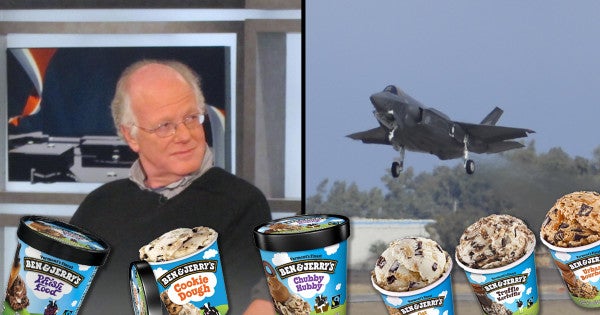 The ice cream man, who often wows the kids with delectable flavors and a healthy scooping of cookie dough, was arrested on Saturday for hawking protest instead of a new combination of chocolate with a little bit of mint and fudge.

In an act of “public demonstration,” local ice cream man Ben Cohen and two others were seen driving a truck and trailer filled with a tower of speakers and what looked like noisy generators around downtown Burlington, Vt., to simulate an “F-35 jet blast.”

The Ben & Jerry's cofounder was protesting the Vermont Air National Guard’s upcoming basing of F-35 jets, which are known to emit loud engine noises known as the sound of freedom or impending doom, depending on your perspective.

Far from keepin’ caramel-and-cookie-in’ on, Cohen reportedly played the loud noises for about six minutes, which led to complaints from fellow citizens.

“That's exactly the point,” he told The Burlington Free Press.

Voters will get a chance to decide whether they want to hear F-35 noise in a Tuesday ballot measure, which really shows the Americone Dream of democracy in action.