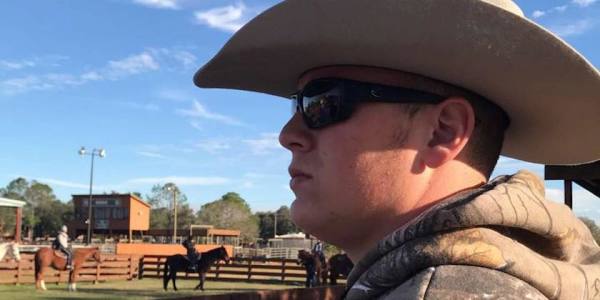 On Wednesday, 19-year-old former student and one-time Army Junior ROTC member Nikolas Cruz sent students scrambling in terror when he opened fire on Marjory Stoneman Douglas High School in Parkland, Florida. Cruz, who killed 17 people before he was arrested, reportedly was obsessed with guns and aspired to join the military.

But he wasn’t the only JROTC student who sprang into action that day.

After 17-year-old Douglas High student Colton Haab heard the first shots, he and his fellow JROTC members shepherded between 60 and 70 students into a JROTC classroom and shielded them with Kevlar sheets, normally used as backdrops for the military students’ civilian marksmanship training.

“We took those sheets and put them in front of everybody so they weren’t seen … behind a solid object, and the Kevlar would slow a bullet down,” Haab told CNN on Thursday. “I didn’t think it was going to stop it, but it would definitely it from a catastrophic to a life-saving” incident.

This 17-year-old student said he tried to protect as many of his classmates as he could: “I’m thinking about how I’m going to make sure everyone goes home to their parents safely” https://t.co/fgMjmVH526

What was he thinking about in those uncertain moments? “I’m thinking about how I’m going to make sure everyone goes home to their parents safely,” he added. “I was destined to get home.”

First established in 1973, the Broward County Public High School system’s JROTC program boasts an average enrollment of 7,650 students in 28 of its 34 schools annually, mostly in Army and Navy programs.

But, like many JROTC programs, its focus is primarily on moral and ethical character-building: According to the BCPHS JROTC site, over 90% of its four-year members attend college, even though only 5% end up joining the U.S. armed forces.

Related: What We Know About The Suspect In Florida’s Parkland High School Shooting »

Fellow JROTC members at Douglas High described the shooter as obviously troubled with a history of behavioral issues.

“When you are in JROTC, you follow a set of rules, you live by them, and you think that you’re a good person,” former JROTC classmate Jillian Davis told the Treasure Coast Palm Beach Post. “You’d think that anyone in this community would follow and abide by these rules.”

The shooter may have failed to embrace the tenets of JROTC, but at least Haab didn’t: In interviews, he described his willingness to put himself in harm’s way to keep his classmates safe.

“We grabbed two pieces of two-by-four, a fire extinguisher and a chair,” Haab told Reuters. “We were going to try to stop him with whatever we had.”