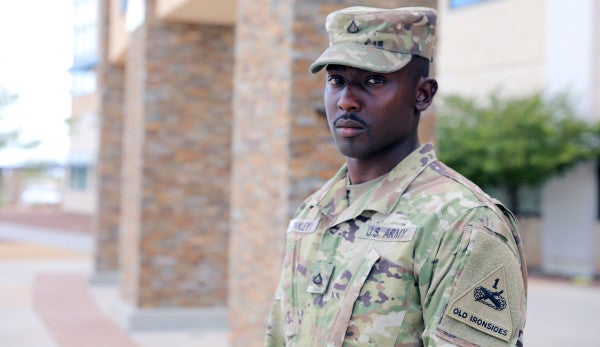 The Army specialist who was hailed as a hero for saving a group of children during the August mass shooting at an El Paso mall complex has been arrested for allegedly deserting his post.

Pfc. Glendon Oakley Jr. was arrested on a deserter warrant in the city of Harker Heights, Texas on Thursday morning, officials at Fort Bliss and the Harker Heights Police Department confirmed to Task & Purpose.

“Pfc. Oakley was absent without leave and was apprehended pursuant to a military administrative warrant,” Army Master Sgt. Vin Stevens said in a statement. “Pfc. Oakley is in police custody pending return to Ft Bliss where the chain of command is prepared to receive the Soldier and address the issue according to applicable laws, regulation, and the Uniform Code of Military Justice.”

“We are genuinely concerned about the well-being of all Soldiers in our unit,” said Col. Ronnie D. Anderson Jr., commander of the 1st Armored Division Sustainment Brigade, said.

Oakley claimed that after hearing gunshots ring out, he attempted to evacuate a group of children clustered in one of the mall's open play areas, screaming for their parents.

In mid-September, the El Paso Police Department cast doubt on Oakley's account after reviewing surveillance footage from the incident.

Oakley was awarded the Army Commendation Medal for his heroism during a ceremony at Fort Bliss in mid-August. When Task & Purpose reached out to Oakley for comment on his award, he declined to discuss it.

“I don't want anymore articles or stories about me,” he told Task & Purpose in a text message at the time. “I just want the attention to go away … I just did what I was supposed to do. I just want this to by (sic) past so I can go back to my normal life.”