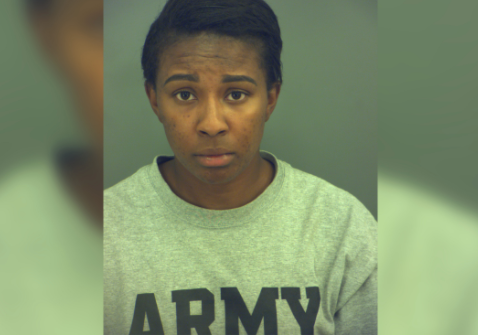 An Army captain at Fort Bliss was arrested last Thursday for her alleged involvement in the murder of another Army captain days prior.

According to a press release from the El Paso Police Department, Capt. Clevy Muchette Nelson-Royster, 27, was the second person arrested in connection to the murder of Capt. Malcom Xavier Perry, also 27.

The press release says that Nelson-Royster was the passenger and owner of a Jeep Cherokee “that rammed into Perry’s car resulting in Perry’s death” on Oct. 11.

The driver of the Jeep, Richard Mustapha Sennessie, 23, was arrested on Oct. 13 and charged with murder.

Perry and Nelson-Royster were both logistics officers with the 1st Armored Division, according to division spokeswoman Lt. Col. Allie Payne.

Citing an affidavit, Army Times reports that on the night before the alleged murder, Nelson-Royster and Sennessie were at a night club when Perry approached them and sat at their table.

A fight broke “between a group of people” at the table, though it’s unclear what caused the fight, according to Army Times.

After the fight, Perry “told Nelson-Royster to meet him at his home,” which is when she and Sennessie got in her Jeep and drove to his house. As they arrived, they saw that Perry “was being assaulted by a group of men,” according to Army Times;

Sennessie joined in on the assault before Perry broke away and got into his vehicle, driving off. Sennessie then got back into the Jeep and drove after Perry, eventually catching up to him.

The police department press release says that the two vehicles crashed when the Jeep “intentionally” ramming into Perry’s Audi.

Sennessie fled the scene on foot, Army Times reports, while Nelson-Royster “remained with the Jeep … until she was found and questioned by police.”

Update: This article has been updated to include details from Lt. Col. Allie Payne.