The USS Paul Hamilton recently returned to its homeport of San Diego sporting what's known as the 'Moultrie Flag,' a white crescent with the word 'LIBERTY' on a blue background 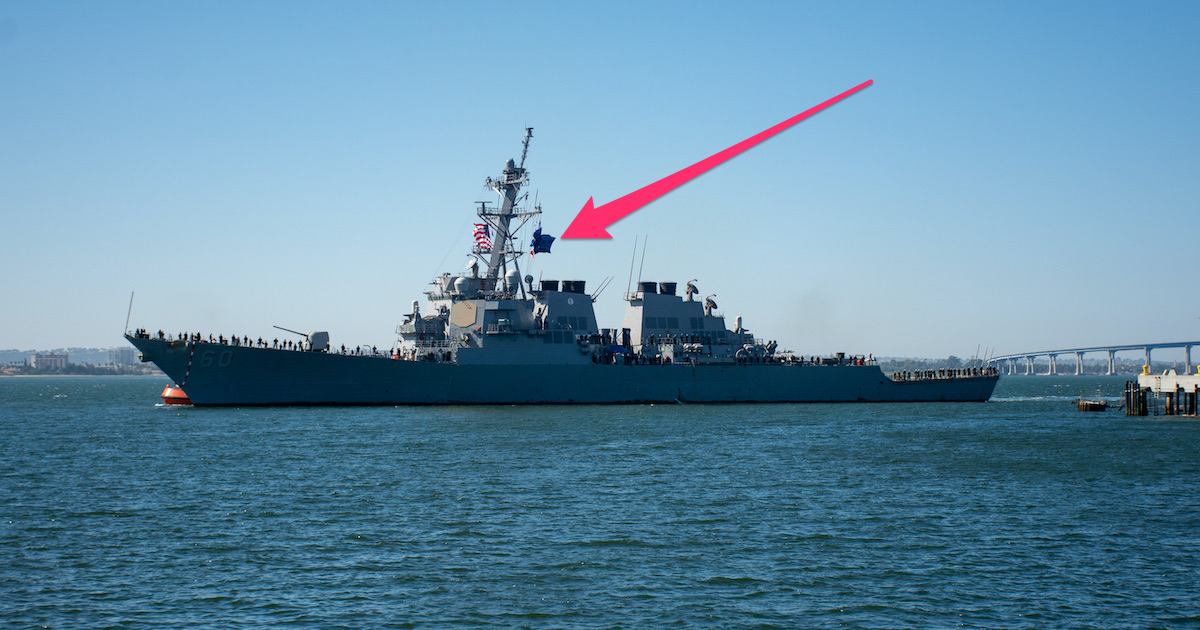 It looks like the USS Kidd isn’t the only guided-missile destroyer in the Navy’s fleet intent on letting its freak flag fly.

First spotted by our colleagues at The War Zone, the USS Paul Hamilton returned to its homeport of San Diego last week sporting what’s known as the ‘Moultrie Flag,’ a white crescent with the word ‘LIBERTY’ on a blue background.

The Paul Hamilton recently returned from a nine-month deployment to the U.S. 5th and 7th Fleet areas of operations, the Navy said in a statement, during which the vessel primarily remained at sea amid the novel coronavirus (COVID-19) pandemic.

“I could not be more proud of this crew and the great work they did in support of American interests in two strategic regions,” said Cmdr. Mark W. Lawrence said in a statement. “The Phantom Warriors adapted to the challenges of operating in a COVID environment and performed brilliantly, demonstrating remarkable self-sufficiency and the will to fight that our nation expects from its Navy.”

As The War Zone points out, the Paul Hamilton’s 270 days away from home earned the destroyer the right to hoist a banner known as the ‘homeward bound pennant‘ on its way back to San Diego in accordance with Navy regulations, something the vessel has done in the past.

But what’s really interesting is the flying of the Revolutionary War-era Moultrie Flag — also known as the Liberty flag — which has special significance due to the South Carolina origins it shares with the Paul Hamilton’s namesake.

The flag was designed in 1775 by South Carolina state militia commander Col. William Moultrie, who gained fame for his successful defense of Sullivan’s Island against the British Royal Navy the following year. Moultrie and his forces, which included the Continental Army’s 2nd South Carolina Regiment, repelled the invading British forces during a ten-hour siege, eventually triggering a full British withdrawal and saving the strategically-important city of Charleston from occupation.

Moultrie marked his victory in battle by flying the Liberty flag over that fort that would eventually come to bear his name.

According to historians, the flag was shot away at least once during the course of the British siege before Sgt. William Jasper raised it again under fire, a legendary show of bravery that not only rallied his fellow troops to a fresh defense but earned the battle flag a place in South Carolina history as the standard for the state’s militia.

Moultrie ended the Revolutionary War with both a promotion to major general and the liberation of Charleston on December 14, 1782, during which the banner was presented by Gen. Nathanael Greene as “the first American Flag displayed in the South,” according to historians. Moultrie would go on to serve as governor of South Carolina, and the state eventually adopted a version of his banner as its official flag.

For the crew of the Paul Hamilton, the Moultrie flag is as much a point of South Carolina pride as the ship’s namesake, the Revolutionary War soldier and United States’ third Secretary of the Navy. The guided-missile destroyer that arrived in San Diego last week is the third Navy vessel to bear Hamilton’s name, and his South Carolina heritage is strongly felt amongst the ship’s crew.

“The Navy values its heritage and traditions, and this is ever-reflected in our ship and crew.” as surface warfare officer Lt. j.g. Tyler Kesthely put it back in February. “Paul Hamilton and previous ships with the same namesake help shape our identity. Our battle flag, the Moultrie Flag, dates back to the very beginning of the Revolutionary War. It’s a fierce tradition that Paul Hamilton sailors still identify with.”

Here’s to you, crew of the Paul Hamilton: We’re sure Moultrie is smiling down on you today.

Related: We salute the USS Kidd for flying the Jolly Roger on its way back to port