A fitting tribute to a legendary soldier and lawmaker. 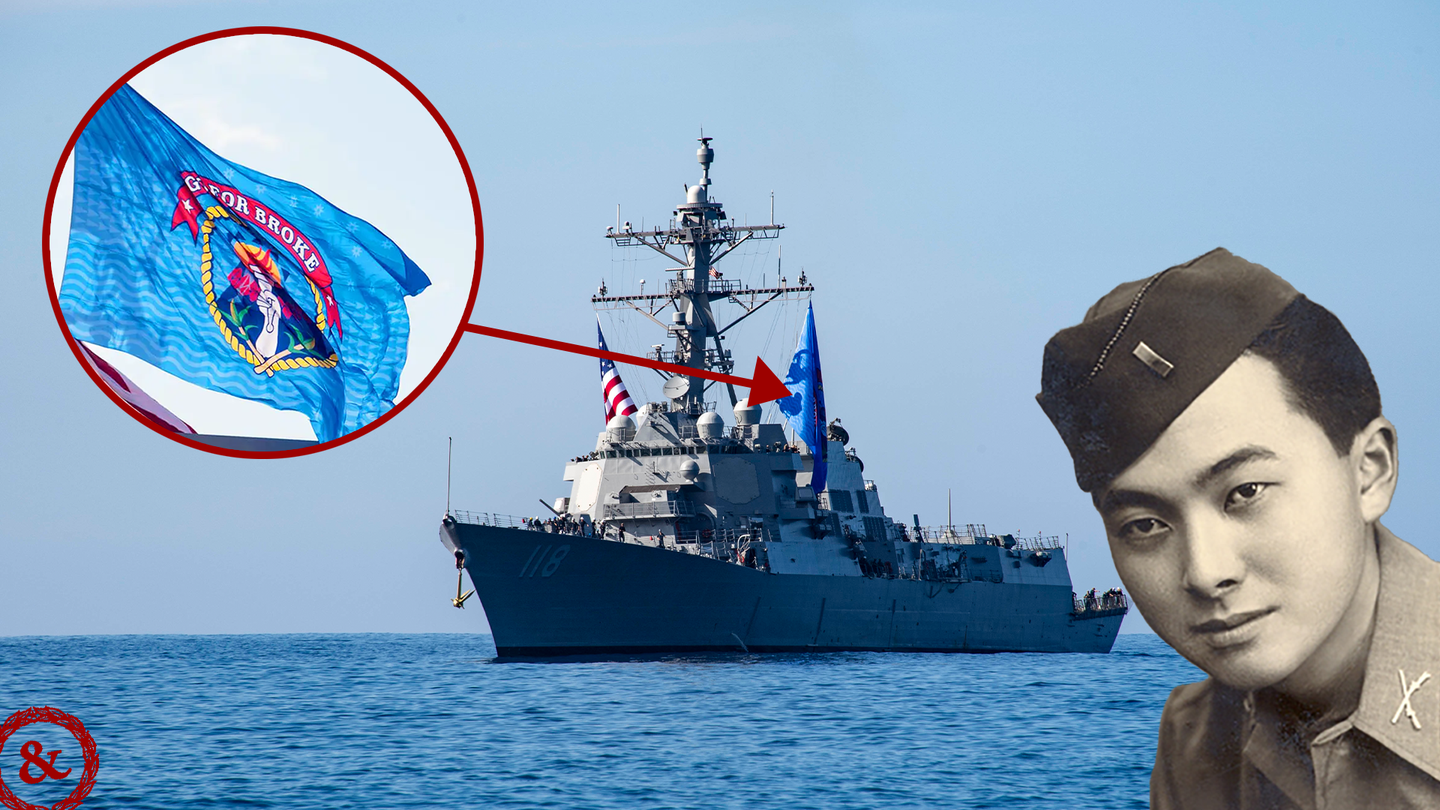 The Navy warship USS Daniel Inouye marked its first official stop at the Hawaiian island of Kailua-Kona last week, and it did so in style: with the ship’s trademark ‘Go For Broke’ battle flag flying in the wind.

The flag’s core features include a hand grasping a torch and the motto ‘Go For Broke,’ both borrowed from the insignia and motto of the highly decorated 442nd Regimental Combat Team with which Inouye served, an infantry unit comprised primarily of second-generation Japanese-Americans during a time when anti-Japanese racism was prevalent and internment was a matter of national policy.

“The motto of the unit was ‘Go For Broke,’ a phrase that meant putting everything on the line in an effort to win big,” according to the National World War II museum. “Just as other minority groups, Japanese Americans faced two wars during World War II—war against the Axis powers and war against racism back home—making ‘Go For Broke’ an appropriate motto.”

The flag’s background also “incorporates authentic ‘ohe kapala (bamboo stamping pattern) designed for us by a Native Hawai’ian artist,” according to the Daniel K. Inouye Institute’s website, a tribute to Inouye’s nearly 50 years of service in the U.S. Senate until his death in 2012.

Inouye was a living legend long before dedicating his life to public service as an American lawmaker. On April 21, 1945, his platoon was tasked with assaulting a German-held ridge overlooking the northern Italian town of San Terenzo. After taking a bullet to the torso from an enemy sniper, then-2nd Lieutenant Inouye kept advancing under a blistering onslaught of German machine-gun fire, taking out two enemy emplacements and pressing the attack the entire way.

At one point, despite effectively losing his right arm to an enemy rifle grenade, Inouye pried a live grenade loose from his own mangled fingers which had stopped working and hurled it at the enemy with his functioning arm, continuing to fight.

Despite his grievous injuries, Inouye “refused evacuation and continued to direct his platoon until enemy resistance was broken and his men were again deployed in defensive positions,” according to his Medal of Honor citation. Indeed, Inouye famously called out to his fellow soldiers as they prepared to evacuate him off the battlefield: “Get back up that hill! Nobody called off the war!”

Despite being shot in the chest and leg and having his right arm effectively blown to bits, Inouye and his fellow soldiers eventually claimed their objective.

“In the attack, 25 enemy soldiers were killed and eight others captured,” according to his Medal of Honor citation. “By his gallant, aggressive tactics and by his indomitable leadership, Second Lieutenant Inouye enabled his platoon to advance through formidable resistance, and was instrumental in the capture of the ridge.”

Inouye retired from the Army as a captain in 1947. His youthful dreams of becoming a surgeon dashed by the amputation of his right arm, he went on to earn a law degree and serve as a prosecutor in Honolulu before Hawai’i earned its statehood in 1959, opening the doors for Inouye to become the first Japanese-American to serve as a state representative in Congress that year and, just three years later, do the same as a Senator.

While Inouye’s honors are many, there may be none more fitting than to see a warship bearing his name and featuring the symbols of his service sailing throughout the Pacific. We salute you, crew of the USS Daniel Inouye — may your travails on the high seas be no less groundbreaking as your namesake’s legacy.