According to the audio, the F-16s performed three "headbutts" and dropped 10 flares before the intruding aircraft finally turned around. 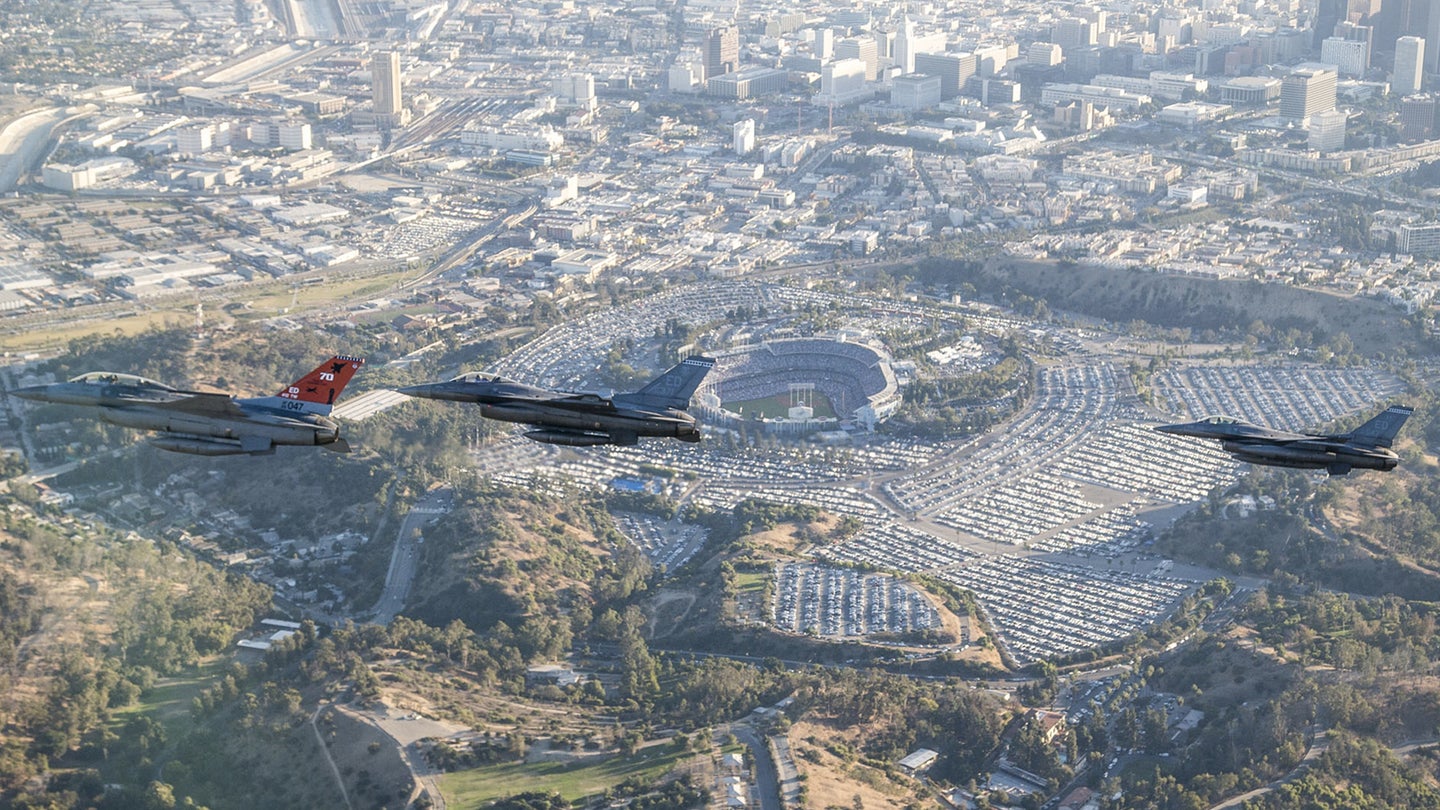 Three F-16 Fighting Falcons from Edwards AFB fly past Dodger Stadium after the ceremonial flyover at the beginning of game two of the 2017 World Series between the Los Angeles Dodgers and Houston Astros Oct. 25. (Christopher Okula/U.S. Air Force).
SHARE

A private Cessna aircraft flew too far into airspace protected for President Joe Biden as the commander-in-chief gave a speech in southern California last week. The Cessna eventually turned out of the restricted zone, but new audio reveals what it was like for Air Force F-16 fighter pilots, a Coast Guard helicopter crew and military and civilian air traffic controllers to intercept the errant plane over Santa Ana, a city near Los Angeles.

The military aircraft were directed by North American Aerospace Defense Command (NORAD) at about 3:10 p.m. PST on October 14 when the Cessna entered the temporary flight-restricted area surrounding Biden, who was speaking at Irvine Valley College at the time, CBS News reported.

In a press release, NORAD explained that the F-16s dispensed flares to get the Cessna pilot’s attention, per standard procedure, and the private aircraft landed without incident.

“These [intrusions] happen rather frequently, though they don’t always get to this level of control,” meaning the flares, a NORAD spokesperson told Task & Purpose on Thursday.

When an intruding aircraft does not respond, American or Canadian pilots flying missions for NORAD have a series of steps for intercepting them. The audio from the mission, which was shared by military flight tracker Aircraft Spots, shows how the steps play out in real life.

At the start of the audio, one of the two F-16 pilots, their callsigns Noble 11 and Noble 12, addresses the Cessna, tail number N58960, and identifies himself as an Air Force armed air defense fighter on the guard radio frequency. The guard frequency is reserved for emergencies and is supposed to be monitored by all capable aircraft in U.S. airspace, according to FAA guidance.

“You have been intercepted,” the Air Force pilot said. “If you hear this transmission, acknowledge with a radio call and rock your wings.”

This wasn’t the first time a small aircraft has intruded on Biden’s airspace in recent months. Just this June, Biden and first lady Jill Biden had to briefly leave their vacation home on Rehoboth Beach, Delaware after a small private plane flew into the restricted airspace overhead by mistake.

“A preliminary investigation reveals the pilot was not on the proper radio channel, was not following the NOTAMs (Notice to Airmen) that had been filed and was not following published flight guidance,” U.S. Secret Service spokesperson Anthony Guglielmi told Reuters at the time.

The NORAD spokesperson explained that the Federal Aviation Administration releases NOTAMs so that civilian pilots know when airspace is restricted due to a VIP like the president or for other reasons. It is the responsibility of civilian pilots to check for such NOTAMs, but some areas are more accustomed to restricted airspace than others.

“In an atypical area, like Los Angeles, general aviation pilots are not as used to that level of temporary flight restrictions, whereas in Washington D.C., you have a very restrictive airspace,” the NORAD spokesperson said.

Michelle “MACE” Curran, a former F-16 pilot who also flew with the Air Force Thunderbirds, the service’s premier aerial demonstration team, explained that many civilian pilots receive NOTAMs directly on the iPads or other devices in their cockpit, but not all pilots are so plugged in, and a few inevitably miss the memo that the airspace they are flying into is off-limits. When that happens, it’s up to NORAD to enforce the rules issued by the FAA.

Interceptions are usually a non-event, where the intruding pilot gets the message over the radio that they ought to turn around and they quickly comply, the NORAD spokesperson explained. But sometimes it takes a little more persuasion.

“A lot of general aviation pilots flying things like Cessnas may not necessarily be on the radio frequencies they should be,” Curran said.

Though Curran never flew a presidential overwatch mission during her time in the Air Force, she knew of the terminology and intercept protocols referred to in the audio recording.

“They’re out there, just having a good time, going for a flight, which is totally legal, until you go inside a TFR by accident, which I think it sounds like is what happened here,” she said.

The Cessna pilot, identified by CBS News as 68-year-old California resident Edward Regan, told CBS he “knew something was wrong,” but only after he had flown into the no-fly-zone, and Regan claimed he heard nothing on the radio.

Though neither NORAD nor the FAA were able to confirm the audio as originating from the intercept mission, Curran shared an unclassified NORAD briefing from 2012 on air interceptions which seem to line up perfectly with the steps taken by the pilots in the audio recording. At first, local air traffic control or NORAD interceptors “will attempt radio contact as the primary means for contacting a suspicious aircraft,” the briefing says.

If radio contact is not established and the intercepting fighters are directed to do so, then the NORAD slideshow directs one jet to pull up alongside the intruding aircraft while another trails behind. One of the fighters rocks its wings to signal an intercept, but if the intruding pilot still does not respond, then it may be time to “headbutt” the intruder.

No, that does not mean the intercepting pilot gets out and whacks the Cessna with their helmet. Instead, headbutt refers to one of the interceptors flying out in front of and then across the intruder’s nose, basically like cutting someone off in traffic.

Though it’s not clear based on the start of the audio recording how long the Air Force pilots had been trying to get the intruding pilot’s attention over the radio, they soon began to headbutt the Cessna and drop flares as another visual warning. Listeners can hear the Air Force aviators talking with their NORAD air traffic controller, identified by the callsign Bigfoot in the audio. Bigfoot gives the Air Force pilots guidance and permission on what to do about the “TOI” which means target of interest and refers to the Cessna.

To find their way around the airspace, Curran noted that the parties read out “Bearing Range Altitude” which is used to help a pilot locate another aircraft in relation to themselves, and “bullseyes,” which is used to help pilots locate other aircraft in relation to a fixed point on the map agreed upon in advance. The numbers for a bearing come from degrees on a compass: 45 degrees points northeast, 270 degrees points west and so forth. Also present on the call was an aircraft referred to as Bouncer 1, which Aircraft Spots explained was a Coast Guard helicopter in the area.

Despite all the military aircraft and attempts to raise the Cessna on the radio, the plane seems to have kept on flying into restricted airspace. One of the Air Force pilots says it’s “renegade,” which Curran explained meant it was a civilian aircraft doing something suspicious and which could be a threat.

It took a while for the Cessna to get the message that it was not where it should have been. According to the audio, the F-16 pilots performed three headbutts and dropped 10 flares before it finally turned around and headed away from the restricted airspace. It may seem bizarre for a pilot to not get the message earlier, but Curran said it’s been known to happen.

“They might see it and just be really confused as to what they are supposed to do,” the former Thunderbird said.

Regan told CBS that he did not hear the warnings over the radio. The only way he knew there was a problem was when he saw the jets nearby.

“There’s potential for fines or losing your pilot’s license. It’s a fairly big deal,” to violate restricted airspace, she explained.

Regan may face a similar punishment: he told CBS that he may lose his license and he is awaiting a “hearing” with the FAA.

Even if the aviation jargon in the audio is too dense for listeners, one thing that may stand out is how calmly all of the parties spoke with each other, despite the potential for a dangerous and even deadly situation on their hands. That calm bearing is no accident — it comes from years of training military aviators and air traffic controllers go through to prepare for this kind of scenario.

“They’re just methodically following the steps and escalating it as required,” Curran said. “It would be very surreal if it went further ahead … but they’ve obviously trained for this and that’s what they’re supposed to do.”

As smoothly as the intercept over California went, many Air Force units never flew domestic combat air patrol missions before the terrorist attacks of September 11, 2001, said Tracy LaTourrette, who flew F-16s with the Colorado Air National Guard. When 9/11 occurred, it was a learning experience for those units, including her fellow Viper pilots in Colorado, to quickly get trained up on how to perform those missions. But soon it became second nature.

“What’s exciting is when you’re in a dead sleep and the klaxon goes off,” said LaTourrette, who recalled doing exactly that to intercept an airliner putting out a hijacking signal, which turned out to be a false alarm. “You’re dead asleep and in less than 15 minutes you feel like you’re waking up on a rocket in the middle of the dark, going somewhere with very little information,” she recalled. “And at the end of the mission, you go back and say ‘how the heck did I just do that?’”

Scrambling for an intercept and being fed information en route is part of how combat air patrol missions get done. Once again, the hard training pays off.

“It’s because they train us so well to handle these situations, so you can wake up in the middle of the night and jump in the jet and not miss a switch,” she said.

Special thanks to John Wiseman for alerting us to this story and to Aircraft Spots for providing the audio of the intercept.