Brace yourselves: the Department of Defense is eyeing a brand new variant of the storied F-15 Eagle to rule the... 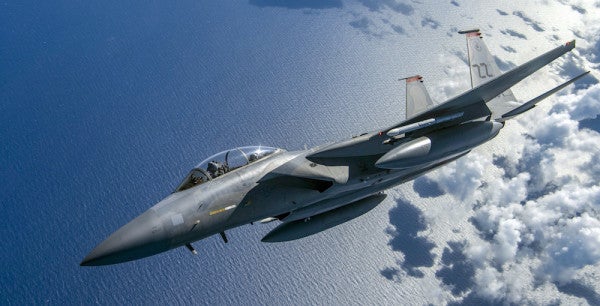 Brace yourselves: the Department of Defense is eyeing a brand new variant of the storied F-15 Eagle to rule the skies, the U.S. military's first purchase of the storied aircraft in more than 15 years.

Bloomberg Government reports that the Pentagon plans on asking lawmakers for $1.2 billion to procure 12 Boeing's F-15X fighters as part of its fiscal year 2020 budget request. The request, if approved, would be the Air Force's first F-15 purchase since 2001, when it snatched up a handful of F-15E Strike Eagle variants.

The proposed variant of the 45-year-old fourth-generation fighter, whose existence was first reported by Defense One in July, was described by The War Zone as the product of a “quiet” inquiry to Boeing and Lockheed Martin regarding a new aircraft that “could seamlessly plug into their existing air combat infrastructure as part of better-defined high-low capability mix strategy.”

If purchased, the F-15X aircraft will reportedly end up in the hands of several Air National Guard units as a replacement for the service's current F-15C aircraft. But at the moment, it appears any acquisition of the advanced F-15 variant will prove an uphill battle within the Pentagon.

According to Bloomberg Government, the push for the new aircraft came from senior leaders within the Pentagon like deputy secretary of defense Pat Shanahan “and not the Air Force, which would be flying the planes.”

Indeed, Air Force Secretary Heather Wilson in September stated that the Air Force had no interest in picking up the fourth-generation F-15X, preferring instead to invest in expanding its fleet of fifth-generation F-35 Joint Strike Fighters.

The National Interest's Dave Majumdar put the Air Force's skepticism more bluntly: “It’s amazing this Boeing sales pitch is being swallowed hook, line, and sinker by the trade press . . . The Air Force will never buy this jet. It is useless inside heavily defended airspace if we are dealing with any sort of real military force.”