The Air Force on Monday awarded a nearly $1.2 billion contract to Boeing to produce its first lot of eight F-15EX fighter aircraft, the first new F-15 to roll off an assembly line for the service in more than 15 years 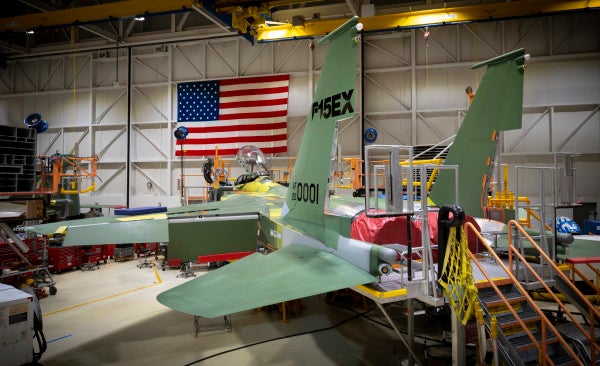 The Air Force on Monday awarded a nearly $1.2 billion contract to Boeing to produce its first lot of eight F-15EX fighter aircraft, the first new F-15 to roll off an assembly line for the service in more than 15 years.

To mark the occasion, the Air Force released a photo of the first of the eight new aircraft in production, complete with a serial number that indicates it's the first aircraft purchased as part of this current fiscal cycle.

“The F-15EX is the most advanced version of the F-15 ever built, due in large part to its digital backbone,” Boeing's F-15EX program manager said in statement. “Its unmatched range, price, and best-in-class payload capacity make the F-15EX an attractive choice for the U.S. Air Force.”

The last year that Boeing produced an F-15 fighter for the Air Force was in 2004, according to the St. Louis Post-Dispatch

The Air Force plans to purchase a total of 76 F-15EX aircraft over the five-year Future Years Defense Program, the service said.

According to The War Zone, the Air Force's full F-15EX fleet could eventually total nearly 144 aircraft as part of the service's push to replace the oldest F-15C/D's in its overall inventory.

“The F-15EX is the most affordable and immediate way to refresh the capacity and update the capabilities provided by our aging F-15C/D fleets,” Air Combat Command chief Gen. Mike Holmes said in a statement.

Related: Watch the world's most advanced F-15 make its maiden flight with a 'Viking' takeoff

In a news release, Boeing noted that the F-15EX “carries more weapons than any other fighter in its class, and can launch hypersonic weapons up to 22 feet long and weighing up to 7,000 pounds.”

“The F-15EX’s digital backbone, open mission systems, and generous payload capacity fit well with our vision for future net-enabled warfare,” said Dr. Will Roper, assistant secretary of the Air Force for Acquisition, Technology and Logistics, said in a statement.

According to both the Air Force and Boeing, the Pentagon is looking to bring the aircraft's advanced capabilities to bear sooner rather than later.

“The F-15EX is ready to fight as soon as it comes off the line,” Holmes said. “When delivered, we expect bases currently operating the F-15 to transition to the new EX platform in a matter of months versus years.”

“Pilots and mechanics currently operating the F-15 anticipate transitioning to the F-15EX in a matter of days as opposed to years,” Boeing said in its statement.