If you're looking for a taste of what the Air Force's first new F-15 fighter jet in nearly 20 years might look like, look no further than the first flight of the F-15QA 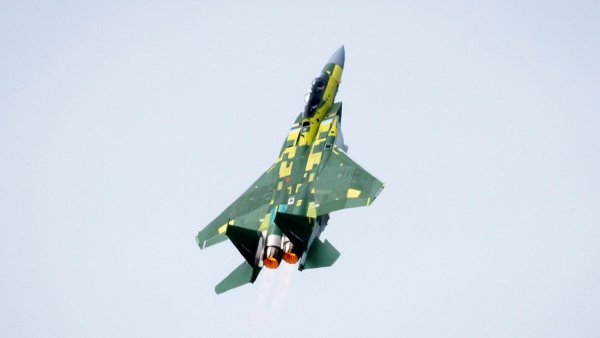 If you're looking for a taste of what the Air Force's first new F-15 fighter jet in nearly 20 years might look like, look no further than the first flight of the F-15QA.

Developed for the Qatar Emiri Air Force and billed as “the most advanced version of the jet ever manufactured,” Boeing announced on Tuesday that it had successfully completed the first flight of its F-15QA variant at Lambert International Airport in St. Louis, Missouri.

To mark the occasion, the F-15QA “demonstrated its maneuverability” with a so-called 'Viking” takeoff, which saw the aircraft climb at a steep angle with an afterburner assist to quickly gain altitude before pulling nine Gs in subsequent aerial maneuvers.

What’s a “Viking takeoff”? Watch as the Qatar Emiri Air Force #F15 demonstrates the maneuver during its first flight. pic.twitter.com/wLHEuvH0Lt

The Defense Department awarded Boeing a $6.2 billion contract in 2017 to manufacture 36 F-15QA fighter jets for the QEAF, with plans to start delivering the aircraft starting in 2021, according to Boeing. A subsequent Air Force foreign military sales contract awarded in 2019 provides for aircrew and maintenance training.

“We are very proud of this accomplishment and looking forward with great excitement to the continued successes of this program,” QEAF F-15 Wing commander Col. Ahmed Al Mansoori said in a statement. “This successful first flight is an important milestone that brings our squadrons one step closer to flying this incredible aircraft over the skies of Qatar.”

“This successful first flight is an important step in providing the QEAF an aircraft with best-in-class range and payload,” Boeing VP and F-15 program manager Prat Kumar said in a statement. “The advanced F-15QA not only offers game changing capabilities but is also built using advanced manufacturing processes which make the jet more efficient to manufacture.”

The first flight of the F-15QA isn't just a success for the QEAF, but a preview of things to come for the U.S. Air Force: According to Boeing, the investments in the F-15QA platform will directly inform the development of the F-15EX, the service's first new F-15 in nearly two decades and “a domestic variant of the advanced” F-15QA.

In January, the Air Force issued a pair of pre-solicitations to procure both upgraded Boeing-made F-15EX fighters and fresh General Electric F110 jet engines associated with the new aircraft as as “a refresh to the [service's] F-15C/D fleet and augment the F-15E fleet.”

According to Boeing, “future plans” could see the Air Force procure as many as 144 F-15EX aircraft in the coming years.