That time an Israeli F-15 landed without a wing

The recommended airspeed for landing an F-15 was around 150 mph. He brought it down around 300 mph. 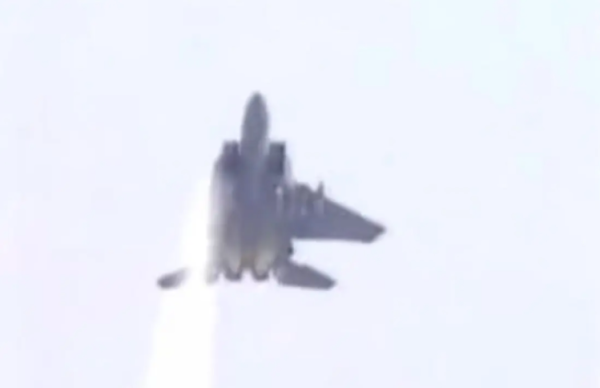 The F-15 Eagle is a legendary air superiority platform with an unparalleled modern air-to-air record of 104 kills with zero loses, but when we think of aircraft that can really take a beating, our minds tend to conjure images of planes like the A-10 Thunderbolt II — landing on forward airstrips with more holes punched in them than a brick of Swiss cheese.

Of course, there’s good reason for the A-10’s toughness. The aircraft was purpose built around the positively massive GAU-8 Avenger 30mm gatling-style auto cannon for close air support. The A-10 was built to fight Soviet tanks from low altitude, with titanium armor and bullet-resistant glass wrapped around the pilot to keep the plane in the fight.

The F-15 was a product of the Cold War, not unlike the A-10, but was designed with a very different purpose in mind. With a top speed of Mach 2.5 and enough hard points to carry 11 air-to-air missiles into a fight, the F-15 might be thought of as a Ferrari compared to the gun truck that is the A-10, but that doesn’t mean these blistering fast fighter-killers aren’t pretty tough on their own.

Despite being an American aircraft, the F-15 has done a great deal of fighting under the banners of a number of allied nations. In fact, a good portion of the F-15’s air-to-air record was earned by Israeli pilots — but the most incredible thing an Israeli pilot may have ever pulled off with the venerable F-15 came in 1983, when pilot Ziv Nedivi and instructor Yehoar Gal managed to land the top-tier fighter after losing its entire right wing in a mid-air collision.

Back in the early 1980s, the F-15 was still a flashy new ride, having just entered service in the United States in 1976. As a part of training, two Israeli F-15Ds (the two-seater variant of the jet) were squaring off in a mock dog fight against four older Douglas A-4N Skyhawks over the Negev desert.

Now, here in the United States, pilots training against one another are required to maintain what’s known as a safety bubble. A five hundred foot or more “bubble” is maintained around each aircraft to ensure collisions don’t occur during the high speed maneuvering inherent to dog fighting, or as pilots tend to call it, executing Basic Fighter Maneuvering (BFM).

As the two Israeli F-15s swung into action against their A-4 aggressor opponents, the reason for this training bubble became pretty apparent. One of the two F-15s, the one with Nedivi at the stick, collided with one of the A-4s, almost instantly destroying the older fighter. Nedivi’s aircraft immediately entered a downward spin and his instructor, Gal, issued the order to eject.

Nedivi, the student in that setting, was senior in rank to his instructor, and opted not to punch out as he regained some degree of control over the aircraft. As the plane leveled off, he and Gal looked over their right shoulders to see fuel vapor pouring out of the wing area, but because of the cloud of fuel being lost, neither could see the extent of the damage beyond it. As Nedivi reduced their airspeed, the aircraft once again began to roll. Nedivi, aware that there was an airstrip just over ten miles out, made a decision.

He hit the F-15’s two powerful afterburners, capable of increasing the engine output of the fighter from 14,590 pounds of force to a whopping 23,770 pounds. With fuel pouring from the wing of the aircraft and the twin Pratt & Whitney F100-PW-220 engines dumping the rest into the burn, it was a gutsy call, but it managed to level the aircraft out and get them pointed in the right direction.

What Nedivi and Gal didn’t know was that their mid-air collision with the Skyhawk had actually sheared the entire right wing of their F-15 straight off the fuselage just about two feet from its root. With ten miles to cover and little more than vapor left in the fuel lines, the two men were doing the impossible: They were flying in a fighter jet with just one wing.

In order to keep the aircraft stable, Nedivi had to maintain a high air speed, which made touching down a difficult proposition. Nedivi knew that the recommended airspeed for landing an F-15 was right around 130 knots, just shy of 150 miles per hour. As he lowered his tail hook and brought the F-15 down to the tarmac, they were actually flying at 260 knots (right around 300 miles per hour). The tail hook Nedivi hoped would slow their landing was ripped off of the aircraft almost instantly, and for a split second, it seemed their miraculous flight was for naught, as the barricades at the end of the airstrip were fast approaching.

With only about 10 meters left before collision, the F-15 finally came to a stop. As Nedivi tells it, it was only then that he turned to shake hands with his instructor Gal, only to finally see the real extent of the damage. The right wing of the aircraft hadn’t been present for the last ten miles of their flight.

Even the F-15’s manufacturer didn’t believe it

It’s safe to say that McDonnell Douglas was well aware that their F-15 Eagle was an incredibly capable platform, but even they were reluctant to believe that the Israeli aviators had managed to fly one without a wing. Some have even quoted the firm as saying such a feat was impossible… that is, until they received a photograph of the plane flying just as the Israeli’s described: Riding on little more than a single wing and a whole lot of courage.

Further analysis determined that the F-15 was able to stay aloft thanks to its powerful engines and the lift created by its fuselage.

That particular two-seater F-15 wasn’t just a training aircraft. In fact, that very jet had already racked up four kills against enemy planes in the 1982 Lebanon War, known within the Israeli military at the time as Operation Peace for Galilee. In a testament to just how incredibly tough these aircraft really are, the damaged F-15 was transported to a maintenance facility in Tel Nof, where it was given a new wing and returned to service.

Two years later, that same jet would score yet another kill, this time against a Syrian Mig-23.