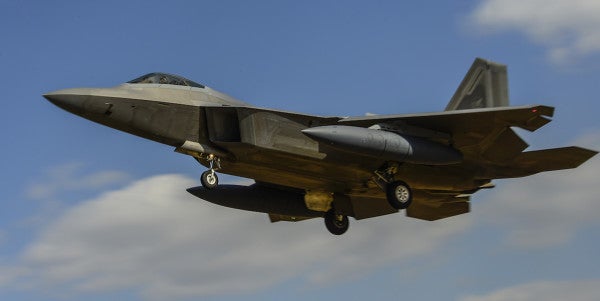 A pilot safely ejected from his F-22 Raptor before it crashed on Friday near Eglin Air Force Base, Florida, according to the Air Force.

The aircraft was assigned to the 43rd Fighter Squadron, 325th Fighter Wing when it went down about 9:15 a.m. on Friday roughly 12 miles northeast of Eglin, a news release from the base says.

No further information about the circumstances surrounding the crash was immediately available.

The pilot is currently at the 96th Medical Group hospital for evaluation and observation, the news release says.

No one else was aboard the aircraft and no civilian property was damaged as a result of the crash.

A board of officers will investigate what caused the crash.

The Air Force only has about 186 F-22s, which have proven invaluable during air operations in Syria.

With such a limited supply of aircraft, each F-22 loss carries extra weight. In October 2018, a total of 17 Raptors were at Tyndall Air Force Base, Florida, when Hurricane Michael destroyed the installation.

The incident temporarily led to fears that the Air Force would not have enough F-22s to meet mission requirements.