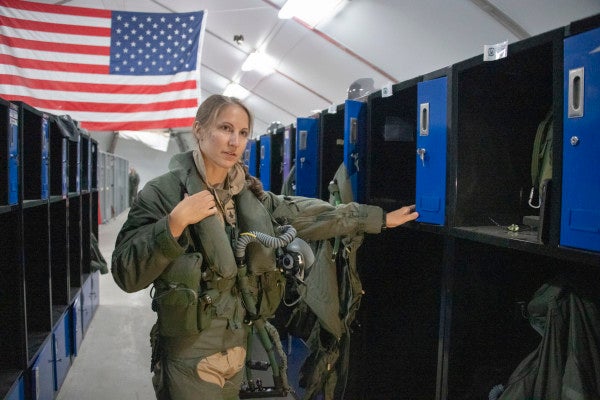 An Air Force pilot with the callsign “Banzai” just made F-35 history, according to an Air Force press release.

Capt. Emily “Banzai” Thompson with the 388th Fighter Wing is now the first woman to fly the stealth fighter in combat after launching from Al Dhafra Air Base in the United Arab Emirates.

The Air Force release published Tuesday did not say when or where Thompson flew the jet. When asked these questions, Air Force spokesman Lt. Col. Timothy Wade said the sortie took place in early June 2020 in the Central Command area of responsibility, declining further specifics “due to operational security.”

Still, the release said that Thompson, who started her career flying F-16 Fighting Falcons, was on her first deployment and this was her first combat sortie. She was also sent off by an all-female maintenance crew.

The Israeli military was the first to take the F-35 into combat back in May 2018, when it used the jet in two strikes in the Middle East. Then in September, the U.S. took an F-35B into combat when it was used to obliterate a static cache of enemy weapons in Afghanistan. An Air Force F-35A followed with an airstrike against a “tunnel network and a weapons cache” belonging to ISIS in Apr 2019, according to Military.com.

The F-35 is the most expensive weapons program in Pentagon history, with  production and maintenance of the high-tech jet expected to cost more than $1 trillion over its 60-year lifespan, according to reporter Valerie Insinna, who wrote the definitive account on the jet's production problems, mishaps, and cost overruns for The New York Times.

Ironically, one day before the Air Force noted Thompson's achievement, an F-35 suffered a major mishap while returning to base during a training flight, the second incident involving the jet in recent weeks. An F-35A out of Eglin Air Force Base crashed upon landing on May 20.