"I never intended to be the first" 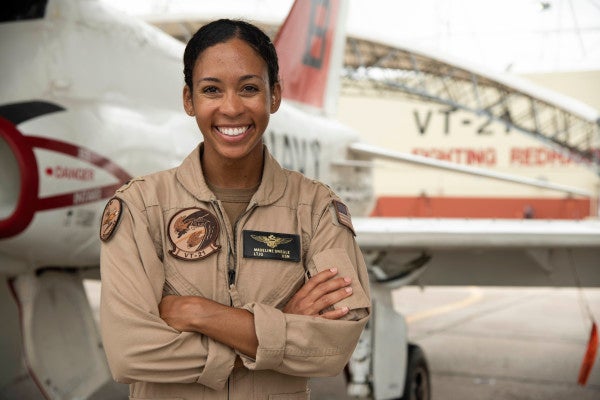 The service announced in early July that Swegle had completed the Tactical Air (Strike) aviator syllabus, completing her final TACAIR training flight in a T-45C Goshawk on July 7.

According to a Navy press release, Swegle and 25 of her classmates officially received their Wings of Gold on Friday, marking “a significant milestone for Naval Aviation.”

Swegle is currently assigned to the “Redhawks” of Training Squadron (VT) 21 under Training Air Wing 2 at Naval Air Station Kingsville, the release says.

She will report to the “Vikings” of Electronic Attack Squadron (VAQ) 129 at NAS Whidbey Island in Washington to start training as an EA-18G Growler pilot.

According to the Navy release, VAQ-129 trains naval aviators “in electronic warfare tactics, techniques, and procedures. in preparation for their fleet assignments.”

Swegle said in the release that she's excited to “work harder and fly high performance jet aircraft in the fleet.”

“It would've been nice to see someone who looked like me in this role; I never intended to be the first,” she said. “I hope it's encouraging to other people.”

Vice Adm. DeWolfe “Bullet” Miller III, commander of Naval Air Forces, said in the press release that Swegle “has proven to be a courageous trailblazer.

“She has joined a select group of people who earned Wings of Gold and answered the call to defend our nation from the air,” Miller said. “The diversity of that group—with differences in background, skill and thought—makes us a stronger fighting force.”