Throughout its history as an independent service, The Air Force has required its aircraft to be piloted by commissioned officers … Continued 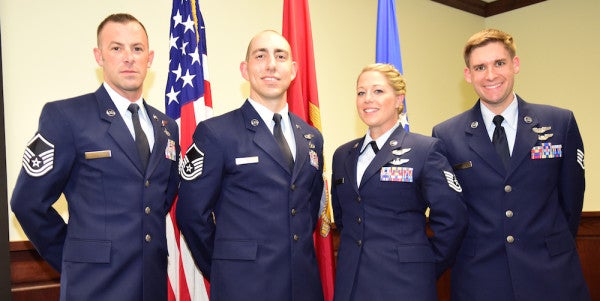 Throughout its history as an independent service, The Air Force has required its aircraft to be piloted by commissioned officers — until now.

“Tech. Sgt. Courtney doesn’t do this because she’s a girl, she just gets up every day and puts her uniform on and comes to work and kicks butt because that’s what she does,” said Maj. Natalie, an instructor pilot with the 558th Flying Training Squadron, told the Air Force in a statement. “That’s who she is. She’s not a woman pilot, she’s a pilot.”

In December 2015, the Air Force made the decision to train enlisted airmen to operate remotely piloted aircraft — more commonly known as drones. In August 2016, the Air Force allowed for enlisted airmen in all Air Force Specialty Codes to apply to be RPA pilots. While 4,000 were initially permitted to apply, the change made more than 87,000 airmen eligible.

During training, the pilots-to-be spend six months sitting the left seat of the control center during flight. They spend another six weeks training to become sensor operators in the right seat, with control cameras mounted on the drones.

“I'm proud to be able to fill that role,” Tech. Sgt. Courtney told KEN5 San Antonio. “I'm excited for what it holds and, hopefully, it encourages other young women. It's also nerve-racking because I don't want to just be the first female pilot. I want to be a good pilot regardless of whether I'm a female or male.”

Courtney, who has been in the Air Force for 11 years, is one among a class of enlisted trailblazers. Her classmate, Staff Sgt. Matthew, was the top graduate in his Air Force undergraduate remotely piloted aircraft training class. The pair completed their sensor training course, which lasted six weeks, along with two master sergeants, two senior officers, and 14 newly commissioned officers.

The Air Force did not release the airmen’s surnames for security purposes.

“This is a testament to the Air Force assessing and selecting highly competent Airmen who, from day one, strive for the perfection required in the intelligence, surveillance, and reconnaissance and attack missions they will fly every day,” Lt. Col. Jason Thompson, the 558th FTS commander, said in a press release.

The Air Force will continue to fill its RPA opening with a diverse array of candidates.

“It’s great to fill that role as the first female,” Courtney said. “It’s awesome and humbling, but our units don’t care if you’re male or female, they just want you to be a good pilot.”