Meet The Highest Ranking Female General In US History

On May 13, Air Force Gen. Lori Robinson took over as leader of U.S. Northern Command, becoming the first female... 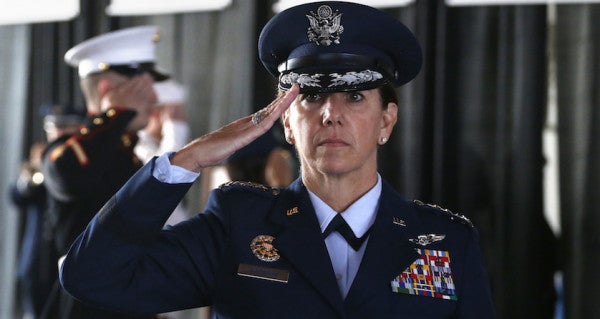 “She was selected because she was the most qualified officer,” said Defense Secretary Ash Carter, who attended the ceremony at Peterson Air Force base in Colorado. “I hope that the excellence she represents is an inspiration to women to join our armed forces.”

Robinson’s appointment to one of the most senior positions in the U.S. military may come as little surprise to those who have followed her meteoric career. According to Defense News, between June 2012 and October 2014, she rose from two-star serving as deputy commander, US Air Forces Central Command, to four-star serving as commander, Pacific Air Forces, an assignment that made her the first female four-star to command combat forces.

Now, Robinson is the highest ranking female service member in our nation’s history. While women have reached the rank of four-star before — including Adm. Michelle Howard, who currently serves as the 38th Vice Chief of Naval Operations — none have reached a billet as high as a unified combatant command like NORTHCOM.

“It is an honor,” Robinson said at the ceremony. “I can’t think of a more sacred responsibility than defense of the homeland. And to be able to do that and be in this level of command is unbelievable.”

Being a combatant commander is often a stepping stone to serving in the top role of the U.S. military, the chairman of Joint Chiefs of Staff, which means Robinson, whose Air Force career began in 1982, could be the first woman to qualify for that position.