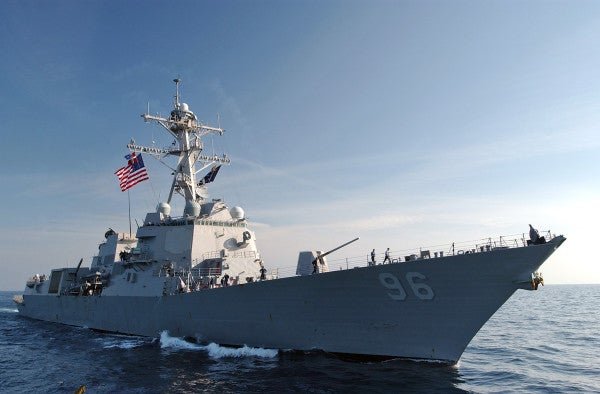 An investigation into events that led to the reliefs of the commanding officer, former executive officer and command master chief of the guided missile destroyer USS Bainbridge earlier this month implicated 15 other officers and senior leaders on the ship in the scandal.

A 149-page preliminary inquiry report released to Military.com through a Freedom of Information Act request found the ship's leaders also failed to get a pregnant officer transferred off the ship in keeping with Navy policy, conducted certain ship maneuvers that endangered gear, and encouraged relaxed uniform guidelines under long underway periods with the sale of “no-shave chits.”

A command climate survey also obtained by Military.com dating from February also found that the ship's top officers presided over a command marked by exeptionally poor trust in leadership and leadership and organizational cohesion.

According to the February investigation, Rongers, the commanding officer, directed the purchase of just under $1,500 worth of fireworks for a July 4 display aboard the Bainbridge, using funds from the ship's morale, welfare and recreation account. In April 2015, Rongers directed a subordinate to purchase the fireworks, knowing that the ship had conducted a similar fireworks display in 2013.

The subordinate, whose name is redacted in the report, negotiated a deal with the company Phantom Fireworks to buy the pyrotechnics. An overnight trip was made to purchase the goods, which included fireworks with names like “The Beast Unleashed” and “Swashbuckler 72-shot.”

Some of the fireworks purchased were not available for sale in Virginia, the investigation shows. Then, while the ship was operating in the Virginia Capes area, near Virginia beach, Rongers dispatched rigid-hulled inflatable boats to pick the fireworks up at Rudee Inlet in a late-night operation.

Rongers told investigators that the fireworks were brought aboard via late-night boat operations in order to avoid force protection measures or other regulations that might have prohibited them coming through the main gate when the ship was pierside in Norfolk, Virginia. He also said he checked with another officer about the legality of using MWR funds for fireworks and got the all-clear. The officer, whose name is redacted in the investigation, denied that Rongers had checked with her.

The fireworks were stored in black trash bags in the ship's pyro locker, near its barbershop. Ultimately, however, officials from Destroyer Squadron 28 got wind of the fireworks plan when a prospective weapons officer from the Bainbridge raised concerns, saying he had already confronted Rongers and Murray, the executive officer, about having them stored aboard ship.

Rongers had the fireworks removed from the ship and loaded into his own car. The MWR funds used to purchase them were never reimbursed, however.

Investigators found that Rongers and Murray failed to do the research needed to ensure the fireworks purchase and display were legal. They violated MWR policy prohibiting funds from being used to pay for “hazardous activities,” according to the report, and Rongers “rationalized” his actions because a fireworks display had taken place before, even though Navy policy prohibits fireworks being stored aboard ship and transported the way that they were.

Rongers did not immediately respond to a request for comment from Military.com.

The gambling accusations stem from a weekly Friday night officers' poker game that took place in the Bainbridge officers' wardroom with Rongers and Murray's consent and participation during the ship's 2015 deployment. There was a $10 buy-in, and participants played with chips in lieu of money and kept scores and money owed written on a piece of paper.

Concerns arose after an officer was asked to pay a buy-in fee she claimed she was never informed about. A legal officer approached Rongers and Murray with doubts about the legality of the command-sanctioned game, according to the report, but they dismissed these concerns, saying no one was forced to play.

Ultimately, the game was temporarily closed down and replaced by a non-gambling game night with activities like Uno and Risk. However, the game started up again later in the deployment, investigators found.

The investigation also revealed a booming business: the purchase of “no-shave chits” which allowed Navy personnel to grow facial hair or, if female, to wear their hair in a ponytail during long periods underway. At $30 a pop, the MWR raised nearly $12,700 on a single deployment from sale of the chits, the investigation found. The ship's leaders sanctioned this practice, and Rongers even purchased a chit at one point, documents show. While the practice of selling the chits is fairly common, investigators found, it is not permitted by policy.

Bainbridge leadership also fell afoul of policy when an officer became pregnant. Though regulations stipulate that pregnant sailors need to be transferred off-ship by the 20th week of pregnancy, she was not transferred until some five weeks after that deadline, even though the report shows she repeatedly brought the matter to the attention of her chain of command. Moreover, Murray waited until January 2016 — past the pregnancy's 20-week point — to inform the ship's placement officer of the need to transfer the officer, even though he was aware of the situation in November, the investigation found.

Finally, Rongers' handling of the Bainbridge on breakaways following underway replenishment caused alarm among sailors and led to the loss of some gear, the investigation found. On multiple occasions, witnesses testified, Rongers would conduct the breakaways at high speed, before personnel and gear were secured. In one case, sailors ordered to clear the deck could hear items tumbling around as the ship broke away. Two aluminum drip pans were lost over the course of the deployment, and one “killer tomato” or inflatable naval gunnery target, was struck loose by the wind, but was ultimately recovered.

Investigators faulted many other officers for failing to take appropriate action in light of the improper behavior taking place aboard the Bainbridge. While Rongers and Murray were advised they were suspected of violating articles 92 and 133 of the Uniform Code of Military Justice, violation of a general order and conduct unbecoming of an officer and gentleman, respectively, 16 others were cited on suspicion of dereliction of duty or violation of a general order.

These include the ship's chief engineer, the supply corps officer, the weapons officer, the force protection officer, the recreational services officer, the Tomahawk leading chief petty officer and others, though the names of these individuals were redacted.

Investigators recommended that Rongers face non-judicial punishment for directing a subordinate to illegally transport and store fireworks. They also recommended that the ship's chief petty officers ensure sailors are taught lessons on “misplaced loyalty” with regards to the fireworks incident, since many aboard ship were found to have covered for leadership, rather than adhered to policy.