Four months after her birth, Sailor Grace Palin may be getting a new name. Her father, Medal of Honor recipient... 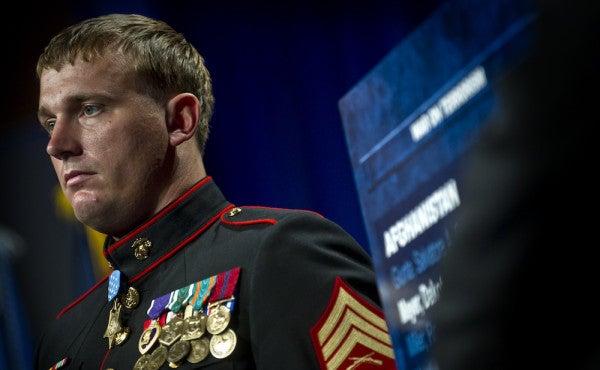 Four months after her birth, Sailor Grace Palin may be getting a new name. Her father, Medal of Honor recipient and Marine vet, Dakota Meyer, has filed a petition to change her last name.

According to court records obtained by the Daily Mail, Meyer filed a change of name petition in an Alaskan Court on May 5. This is just the latest in a continued custody battle that has raged on between Meyer and Palin, the daughter of former Alaska governor and 2008 Republican vice presidential candidate Sarah Palin.

Palin, 25, and Meyer, one of just two living post-9/11 Marines to earn the Medal of Honor, got engaged in March 2015 and had planned to get married over Memorial Day weekend that same year. However, the wedding was called off just days before.

Then, a month later, Palin announced she was pregnant, but did not make any statement regarding paternity. Months of speculation about the baby’s father ended when Meyer shared a hospital photo of Palin and the newborn shortly after her birth.

Related: Dakota Meyer on why Donald Trump is wrong to ban muslims »

As part of the custody agreement reached by the two parents, Meyer will make 3,600-mile round trips to Anchorage from his Kentucky home to visit Sailor, and Palin will be required to facilitate.

Despite their troubles, however, Palin shared an Instagram photo of the she and Meyer co-parenting their daughter.