The Company Behind The AK-47 Is Invading The Fashion Industry

The makers of the most widespread firearm in the world are turning their sights to fashion. The Kalashnikov Concern, the... 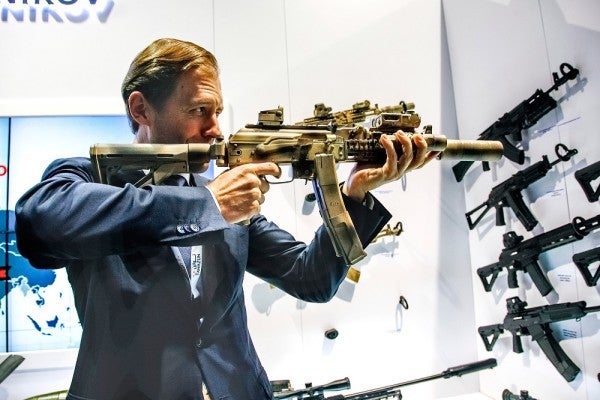 The makers of the most widespread firearm in the world are turning their sights to fashion. The Kalashnikov Concern, the manufacturer of the AK-47 assault rifle, will launch a military style fashion line in an effort to make up for a loss in sales due to Western sanctions, according to BBC.

Kalashnikov is trying to boost domestic revenues with the clothing line and plans to open as many as 60 stores across Russia by the end of this year.

Related: AK-47 Vs M16: This Epic Video Decides Which Is Better »

The European Union has imposed an export and import ban on trade in arms that will extend to July 31, 2016, and sanctions from the United States have cut off the supply of Kalashnikovs to sellers in the states. With those markets closed, the company is trying something new.

According to BBC, the company’s marketing consultant, Nikolai Grigoryev, hopes the fashion line could tap into the “rapid growth of patriotism in Russia related to the theme of war.” However, BBC notes that Grigoryev told pro-Kremlin Life TV that the sales would only constitute a small fraction of the company’s total revenue.

The fashion line is not the company’s first attempt to change its image in an effort to bolster sales. In 2014, it attempted to rebrand Kalashnikov firearms as weapons of peace.

“Kalashnikov weapons are made to maintain peace around the world, regionally and in particular countries—they help nations protect their sovereignty, their right for peaceful existence, their right to pick their own historic fate,” the company announced during a 2014 rebranding campaign.