The company behind the ubiquitous AK-47 assault rifle has a new weapon of war on the horizon: robot guns that... 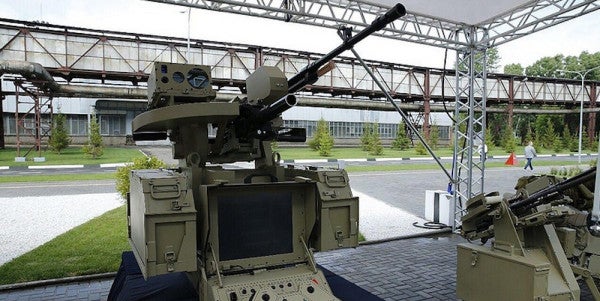 The company behind the ubiquitous AK-47 assault rifle has a new weapon of war on the horizon: robot guns that learn and kill all on their own.

Kalashnikov Concern has reportedly developed a “fully automated combat module based on neural network” that can allow various weapons platforms to “identify targets and make decisions” independently of a human operator, the company spokeswoman Sofiya Ivanova told Russian state news agency TASS on July 5. The advanced “neural network” system allows autonomous weapons platforms — say, unmanned aerial vehicles or a ground combat vehicle — to not only make decisions on their own, but adapt to their environment and apply “acquired experience” to pre-existing instructions.

Kalashnikov Concern has been experimenting with robotics and artificial intelligence for some time. In March, the weapons manufacturer hyped its brand-new BAS-01G Soratnik combat vehicle, a seven-ton mini-tank designed to semi-autonomously bring the pain with a Kalashnikov PKTM machine gun and Kornet-EM anti-tank missiles. And according to Defense One, Russian news agencies have touted robot-led victories against enemy combatants in Syria, although the veracity of those claims appears suspect.

More importantly, Russian weapons manufacturers appear to be leapfrogging U.S. Department of Defense planners when it comes to integrating artificial intelligence into the battlefield. Where the Pentagon sees AI as an important tool for intelligence analysts, the DoD has hesitated to incorporate autonomous decision-making technology directly into weapons of war for one simple reason: Autonomous murderbots are “un-American,” as Defense One put it.

“I will make a hypothesis: that authoritarian regimes who believe people are weaknesses,” Deputy Defense Secretary Bob Work told Defense One in 2015, “that they cannot be trusted, they will naturally gravitate toward totally automated solutions. Why do I know that? Because that is exactly the way the Soviets conceived of their reconnaissance strike complex. It was going to be completely automated. We believe that the advantage we have as we start this competition is our people.”

It’s unclear how the transition between the Obama and Trump Pentagons has dramatically affected the DoD’s approach to AI and robotics, but military planners should consider reassessing their priorities sooner rather than later. According to Ivanova, the Russian military will get a look at the new technology in action as soon as Moscow’s International Military-Technical Forum (ARMY-2017) in August. Which means before long, warfighters may end up facing down one of these monsters downrange: