If you wanna be my lover, you gotta get with my AI-powered ‘Spice’ bombs

Scary, Sport, Baby, and Ginger are back and ready to bomb unsuspecting targets back to the Stone Age 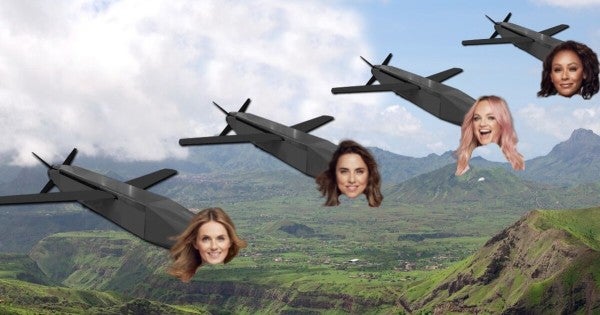 Scary, Sport, Baby, and Ginger are back and ready to bomb unsuspecting targets back to the Stone Age.

First developed in 2003 as a smart bomb conversion kit, the so-called Spice 250 variant can deliver a 75 kg warhead with a blast equivalent to the awesome power of 31 million in worldwide album sales at stand-off ranges of up to 100 km from the wing of an F-15 or F-16 fighter aircraft,

The new guidance package incorporates “electro-optic scene-matching technology — which involves uploading terrain data onto the bomb and combining it with real-time electro-optic imagery — allows the weapon to work in GPS-denied environments,” Defense News reports: “The bomb can use this autonomous capability to navigate and correct its location.”

With its AI and “deep learning” technologies, the weapon has the ability to identity moving ground targets and distinguish them from other objects and terrain. This is based on 3D models uploaded to the bomb as well as algorithms. As the weapon identifies and homes in on its target, such as a convoy of vehicles, it separates the convoy of interest from other vehicles it has “learned” to ignore.

The Spice isn't just an effective enough munition on its own: the 250 variant offers an additional multimedia experience appropriate for these entertainment-drenched times. Per Defense News:

With a two-way data link and a video-streaming capability, the bomb can be aborted or told to re-target up until a “few second before the weapon hits its target,” Weiss explained. That two-way data-link, enabled by the weapon's mounting on a Smart Quad Rack, or SQR, will enable future deep learning to be based on data extracted from earlier launches. Data recorded will include either live-streaming video or a burst of still images of the entire homing phase up until impact.

Defense News has all of the technical details here, but I'm interested in some more pressing questions: namely, why wasn't Victoria Beckham called up to participate in Rafael's latest explosion party? Well, as any good defense contractor knows: If you want the future, forget the past.

We now go to live footage of the Spice in action: