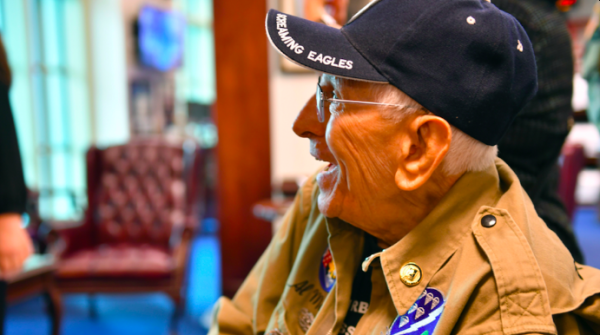 Mampre, who died on May 31 at 97 years old, was the last living medic from Easy Company, according to the Chicago Sun-Times. A number of soldiers assigned to his unit provided an honor guard for his funeral service.

His great nephew, Staff Sgt. Paul Mampreian, a medic with the 2nd Infantry Division, said that Mampre influenced his decisiion to become a medic.

“He was always humble,” Mampreian said. “He never talked about himself.””

Mampre told Stars & Stripes in 2018 that compared to what Army medics have now, the medics of his time “were neanderthal men.”

“My basic training in being a medic was Boy Scouts,” Mampre said. “Most of what they reviewed with me was what I learned in Boy Scouts, except giving shots, because we were to give all the shots. We practiced on oranges. Well, we never ran into an orange in combat.”

Brig. Gen. Kris Belanger — the commanding general of the 85th Army Reserve Support Command, who became friends with Mampre — wrote in Clarksville, Tennessee's The Leaf Chronicle that Mampre was “wryly funny, unabashedly patriotic, and forever in awe of those who selflessly served.”

“Our Army's DNA is shaped by those who have served before, and our modern force stands on their shoulders,” Belanger wrote. “Those of us who have had the rare gift to know patriots like Al Mampre will never let their stories or their sacrifice be lost to our collective memory.”

Mampre became a psychologist after World War II and married his wife, Virginia, who he met when he was eight years old, Belanger wrote. They were “the definition of life partners.”

The reverend who spoke at Mampre's funeral service, Larry Handwerk, said that Mampre had “true grit,” per the Army.

“He was the most generous of men,” Handwerk said. “Wherever he went he was like the sun. His ability to connect with all was like sunshine.”

SEE ALSO: 10 Things You Never Knew About 'Band Of Brothers'